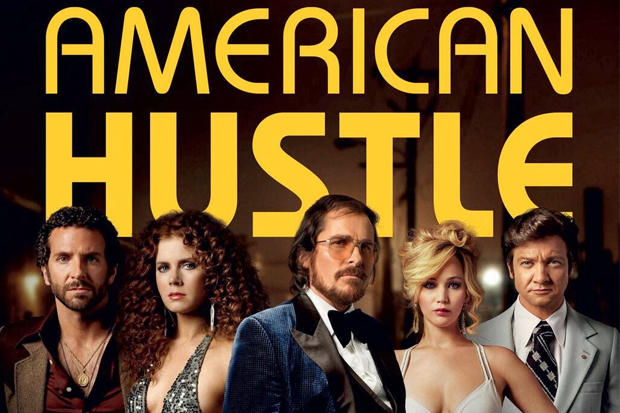 13 Feb The case for American Hustle

Posted at 13:59h in Awards Season by Doug Jamieson 1 Comment

This Oscar race, I thought I’d do something a little different. I found that, for the first time in a long while, all the films nominated for Best Picture really are brilliant movies, and in their own way, each of them somewhat deserves to win Best Picture. So, I thought it best to lay out my thoughts on each one, and make a case for why it should win Best Picture. Being fair, and so as not to reveal my final predicted winner just yet, I will do this alphabetically. First nominee off the rank – American Hustle.

Two words – David O’Russell. The man behind Oscar darlings The Fighter and Silver Linings Playbook has done it again, and yet still hasn’t managed to actually win a damn award for himself. And both of those films failed to capture the big prize as well, so surely this year American Hustle will take it out. The film is up for ten awards, equal first with Gravity for the most nominations this year, so it seems almost unfathomable that it won’t win Best Picture. If the voters loved the film enough to give it nominations in every major category this year, the momentum should be with it when it comes time to vote for the winners.

Four amazing performances, four Academy Award nominees. We have the extremely rare situation where a film has all four acting nominations under its belt. In the 86 year history of the Oscars, this is only the fifteenth time this has happened, and incredibly the second year in a row for a David O’Russell film. Prior to last year, you had to travel all the way back to 1981’s Reds for the last time this occurred. Why is this important? Well, the acting branch makes up the biggest section of the Academy voters. Actors can tend to vote for acting performances they admire, and not just in the actual acting categories, but across the board. The actor’s choice for Best Picture could just be the one with the most acting nominations. Don’t forget, the film did take out the big prize at the SAG Awards. Those same SAG voters are at it again, come Oscar time.

The preferential voting system. Look, it would take an entirely separate post to explain the way the voting system works for Best Picture. Google it if you’re really that interested. Basically, it’s no longer a case of the film with the most votes winning, but rather an extremely complicated system, where voters rank all nine nominees, and then based on preferences, a winner is decided. American Hustle will get a huge share of 1 preferences, but that’s not enough. You have to be the second, and even third, choice of those that didn’t rank you #1 as well. There will be those that feel like they have to vote for 12 Years A Slave or Gravity as their top pick, and frankly they will split that vote, so it won’t be enough to win outright. There’s no denying those two are the leaders, and likely favourites to win. However, my gut instinct tells me the second choice of a whole slew of voters will be the film they actually enjoyed the most, not the film it’s cool to vote for. American Hustle will be that film. A wave of support in secondary voting can secure you an Oscar these days. When there’s no outright leader, a la Argo or The Artist, anything can happen.

It won’t win anything else. I know that sounds insane, but hear me out. Your typical voter will end up splitting their votes all over the place for a bunch of films. They give Director to Cuarón, they give Actor (Lead & Supporting) to Dallas Buyers Club, they give Supporting Actress to 12 Years A Slave, they give Original Screenplay to Her, and Gravity gets their vote for every technical award. Then they get to the end of their ballot, and they realise they’ve not given a single vote to a film with the most nominations. Something about that doesn’t sit right with them. Suddenly, they’re voting for American Hustle for Best Picture, or at the very least, listing it as #2 or #3 on their preference. That could be all it needs to steal the award. A film winning only Best Picture, and nothing else, has happened twice in Oscar history (The Broadway Melody and Mutiny On The Bounty…yeah, it’s been a while), so theoretically, it could happen this year.

Will we see my favourite film of the year become the best picture of the year? Am I actually predicting American Hustle to win? Find out a little closer to Oscar night…