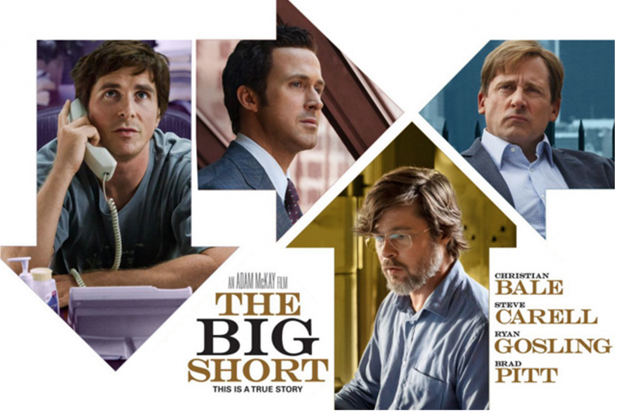 Posted at 09:04h in Awards Season by Doug Jamieson 0 Comments

A few months before awards season began, The Big Short wasn’t even on anyone’s radar. But due to Paramount’s shrewd decision to surprise us all and give the film a December release, it has come from nowhere to be a serious awards contender. Does it have the power to continue to surprise and take the big prize of Best Picture? Let’s take a look at the case for and against The Big Short.

That “surprise” PGA win. I put surprise in inverted commas because it wasn’t a surprise to yours truly. Yeah, I’m bragging, but I was one of the few people who correctly predicted the Producers Guild going with The Big Short so I get to gloat, okay? It shocked pretty much every Oscar expert and is one of the few times I’ve gone out on a limb and been correct. But why is it such a big deal? Well, for the last EIGHT years in a row, the PGA winner has gone on to win the Oscar for Best Picture. Eight years is a streak that’s difficult to ignore. Winning PGA signaled the start of the successful Oscar campaigns for The King’s Speech (after it had been all about The Social Network) and Birdman (after it had been all about Boyhood), so in an awards season dominated by Spotlight, why shouldn’t the PGA win signal the rise of The Big Short?

The preferential ballot. If you’ve been following my Oscar ramblings for the last few years, you should know about the unique preferential style of voting the Academy uses for Best Picture. If not, maybe give it a Google. It’s too complicated for me to explain, but it ultimately works best for a film universally liked. The Big Short is such a film. Whether you fully understand its complicated plot, you’re still highly likely to enjoy the film. It’s fun and slick and intelligent. Even those who don’t give it their #1 spot will very likely still rank it in their top 3 and that’s precisely how you win Best Picture. Plus there’s only one other awards ceremony that employs a preferential style of voting – the PGA. It won there so why wouldn’t it win again on another preferential ballot?

The most relevant film in the running. As the recently released (and expertly crafted) The Big Short TV spot points out, we are starting to see the same financial mistakes that caused the 2008 GFC being repeated right now. This makes the message of The Big Short even more powerful than it already is. That kind of relevance can be the turning point at convincing Oscar voters. Awarding a socially relevant film sends a message of the Academy also being socially relevant. This is coupled with it being an election year in the US where the economy is a hot topic, particularly with Bernie Sanders and his numerous Hollywood supporters.

Comedies don’t win Best Picture. Drama is easy. Comedy is hard. But nobody in the Academy seems to care for that notion. We haven’t seen a true comedy win the top prize at the Oscars since 1977’s Annie Hall. While Birdman and American Beauty could be called comedies, they’re far blacker and more dramatic than The Big Short. It does have its serious moments, particularly towards the climax, but for the most part, we’re dealing with a comedy here. Plus it’s directed by a man famous for goofball comedies like Anchorman and Talladega Nights. Hardly the ingredients the Academy usually goes for.

It hasn’t won the precursor awards. While the PGA win is obviously significant, it’s literally the only major prize the film has taken this awards season. It’s been in the running at the Golden Globes, SAG Awards, DGA and the BAFTAs, but failed to win at all of them. It would be somewhat unprecedented to see a film win Best Picture with such little precursor awards love. If the PGA win was the start of its run to take Picture, you would likely have seen it win at some of these other ceremonies. Instead, The Revenant has dominated these late awards shows. That doesn’t bode well for The Big Short, given Oscar voting didn’t commence until long after the glow of the PGA win had disappeared.

It’s just too damn confusing. If you know nothing about the GFC, Wall Street or finance in general, this probably isn’t the film for you. While it does go to great lengths to explain the intricacies of just how the financial world collapsed (with those genius celebrity cameos), it’s still a very complicated and confusing plot for non-financially minded folks. The Academy generally likes to keep things simple. Films that don’t instantly make sense to a wide audience don’t usually win Best Picture. They’ll nominate it and award its screenplay, but that’s as far as they’ll go.

So, will the late-charger take it home on Oscar night? Am I actually predicting The Big Short to win Best Picture? Find out on Sunday when I unveil my final predictions.