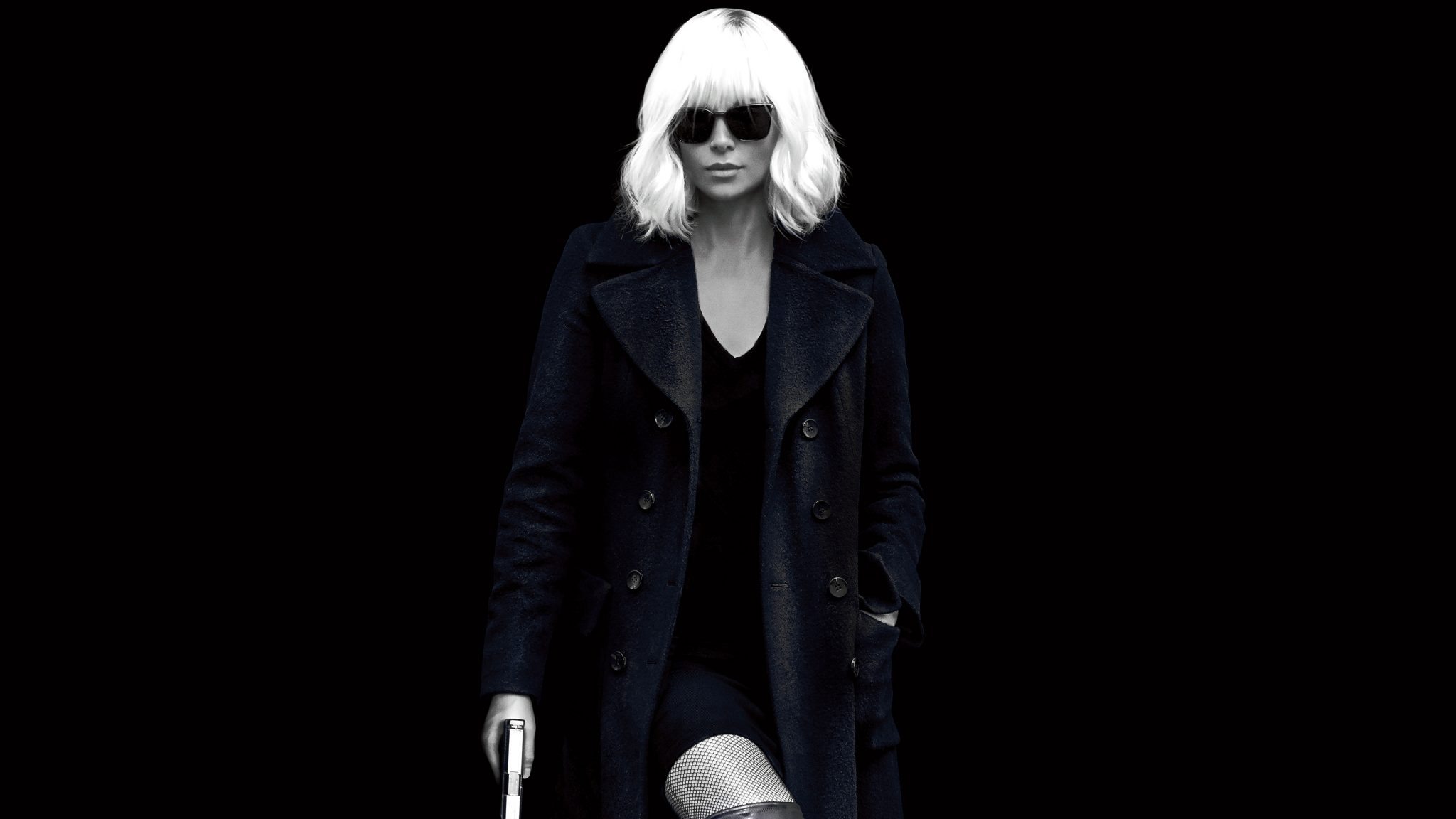 Posted at 02:19h in Opinion, Reviews by Doug Jamieson 0 Comments

Set in 1989 at the end of the Cold War and the fall of the Berlin Wall, Atomic Blonde introduces us to Lorraine Broughton (Theron), our cold-as-ice heroine, ironically emerging from an ice bath, battered and bruised and in desperate need of a Stoli on the rocks. Lorraine, an MI6 agent, is being interrogated by her superior officer, Eric Gray (Toby Jones), and a mysterious CIA representative, Emmett Kurzfeld (John Goodman).

Looking incredibly worse-for-wear, but still somehow completely beautiful (it is Charlize, after all), Lorraine narrates the events of her previous few days in Berlin, framing the movie as one long flashback – a narrative style which tragically works against the film’s potential intrigue and suspense, as well as its pacing. With stone-cold delivery, Lorraine fills us, and her interrogators, in on what she’s been up to, and why she’s been hauled in for questioning.

In West Berlin, MI6 agent James Gasciogne (Sam Hargrave) has been murdered by a KGB operative (Jóhannes Haukur Jóhannesson) and a list (lazily known as “The List”) containing the details of all British intelligence agents has gone missing. Her mission is simple – find “The List”…list. To help her with said mission, Lorraine links up with David Percival (James McAvoy, chewing every piece of scenery around him), a wild and eccentric Berlin MI6 agent who has “gone feral” and now spends his time selling Jack Daniels and Jordache jeans to repressed East Berliners.

Percival’s allegiances and intentions are consistently murky, but he is protecting an East German defector, known as Spyglass (a sadly underused Eddie Marsan), who, with his photographic mind, has committed the entire “List” to memory. Complicating matters further is the omnipresence of a double agent, known as Satchel, in the midst, as well as the emergence of a mysterious sexy French operative, Delphine (Sofia Boutella), who is literally stalking Lorraine. And let’s not forget the whole swag of Communist bad guys trying to kill them all in the process.

If this plot sounds overly confusing, you’re not wrong. I spent most of this film scratching my head, wondering what the hell was going on. Or, more importantly, why the hell I should care. This kind of cinematic puzzle can be intriguing, but only when it’s crafted well. Atomic Blonde ultimately makes for an incredibly frustrating and baffling cinema experience. Making matters worse is the action frequently cuts back to Lorraine’s interrogation, which attempts to explain the plot for the audience, but ultimately only confuses us even more.

The film is based on graphic novel The Coldest City by Antony Johnston and Sam Hart which is where this form of narrative style comes from. And that’s fine in a graphic novel. The present day to flashback style works perfectly fine there, but not in a piece of action cinema, and it winds up being the film’s unfortunate downfall. By knowing full well our heroine is alive and kicking at the end of the flashback, it’s impossible to really care when she faces each brutal attack from whatever group of thugs is after her.

We know Lorraine will make it through, no matter how dire things seem, so there’s no edge-of-your-seat suspense to grab the audience which is a genuine shame. Sure, we don’t know about the fate of the other characters, but none of them are ever really interesting enough to care. The other issue with this narrative style is the film’s momentum grinds to a jarring halt each time we’re pulled out of the flashback, and in an action film, momentum is everything – particularly an action film daring to run for an exhausting nearly two-hours. Yes, I looked at my watch several times…

In saying that, when the action is on, it’s bloody glorious stuff. Loaded with incredible stunt-work and enormously impressive fight choreography, stuntman-turned-director (yes, that’s a thing now) David Leitch knows how to deliver the spectacle. From the film’s first dabble with theatrics featuring Lorraine bludgeoning two men with her high-heel stiletto (whilst inside a moving car, no less) to the utterly insane and ridiculously epic finale fight sequence, it’s here where the film really shines.

And that finale sequence is probably worth the price of admission alone. Witnessing Lorraine do ferocious hand-to-hand battle with numerous hapless henchmen, whilst trapped inside an apartment complex stairwell, is sensational cinema. The scene is masterfully crafted. Stretching out for over five minutes, with wonderfully claustrophobic and intensely frenetic cinematography from Jonathan Sela, and deftly edited by Elísabet Ronaldsdóttir, the entire sequence appears to all be done in one continuous take. It’s a shame this single impressive technical display seems to feel more like a sneaky ploy to make the audience forget the dull hour-and-forty-five-minutes that preceded it.

That dullness is notable by the film’s shocking lack of character depth. There’s very little that shows Lorraine’s motivation (at least male-equivalent John Wick was motivated by his dog), or even any explanation as to why she’s so hardened and tough. A few hints at some form of backstory wouldn’t have gone astray. There’s some attempt to humanise her, via her sudden connection to Delphine, but frankly, it’s hardly an interesting or developed relationship. The presence of a “hot” girl-on-girl sex scene feels entirely forced, and is really only something to stick in the trailer for the horny teenage boy market. And if someone can please explain to me what the hell Til Schweiger’s character (whose name I never caught) is plonked here for, I’d be super appreciative. Seriously. I have no idea.

Much like her work in Mad Mad: Fury Road, Theron gives it her all here, and, for the most part, pulls it off. It takes a rare actress to be both stunningly glamourous and physically commanding at the same time, and she knows how to do both perfectly. It’s hard not to resist how captivating Theron can be. Even without the lack of a fully-formed character, you can’t help but cheer for her, especially when she’s brutally doing waste to anyone that crosses her path. Her chemistry with McAvoy is dynamic, and the two play off each other amazingly well. McAvoy takes this role and runs with it, much like his work earlier this year in Split, and without his presence, the film would have been even more mind-numbing to endure.

We all know film soundtracks have been all the rage these last few years. With Baby Driver and Guardians of the Galaxy Vol. 2 showcasing how to intelligently integrate existing music into a piece of cinema, it unfortunately takes a film like Atomic Blonde to show how not do it. Or, more accurately, how to stick about twenty-or-so 80s club hits into a film for no other reason than it happening to take place in the 80s. There’s no real rhyme or reason to the song choices. Sure, it’s great to hear New Order’s “Blue Monday” to kick things off, but it serves no real purpose. Every subsequent choice feels incredibly unimaginative and lazy.

And the use of music can’t seem to decide if it’s part of the film action or part of the film score. Sometimes the chosen 80s track comes from a device in the scene itself (a boombox, a car stereo) and then switches to playing over the scene…and then back to the device…and then back to the score. There’s even one bar scene where “After the Fire” by Der Kommissar is playing (seemingly from the speakers in the room) and inexplicably stops when someone ignites a cigarette lighter, and suddenly jazz music that is actually playing inside the bar takes over. What? It’s frustrating as all hell to see music used in such an unorganised and distracting way, and it genuinely detracts from the overall film.

It’s difficult to watch an action film like this where it’s almost impossible to care much about anyone in it or anything they’re doing. Atomic Blonde can be wonderfully fun to watch, but it’s tough going and the pay-off is minimal, at best. It can be blast, just not an atomic one.