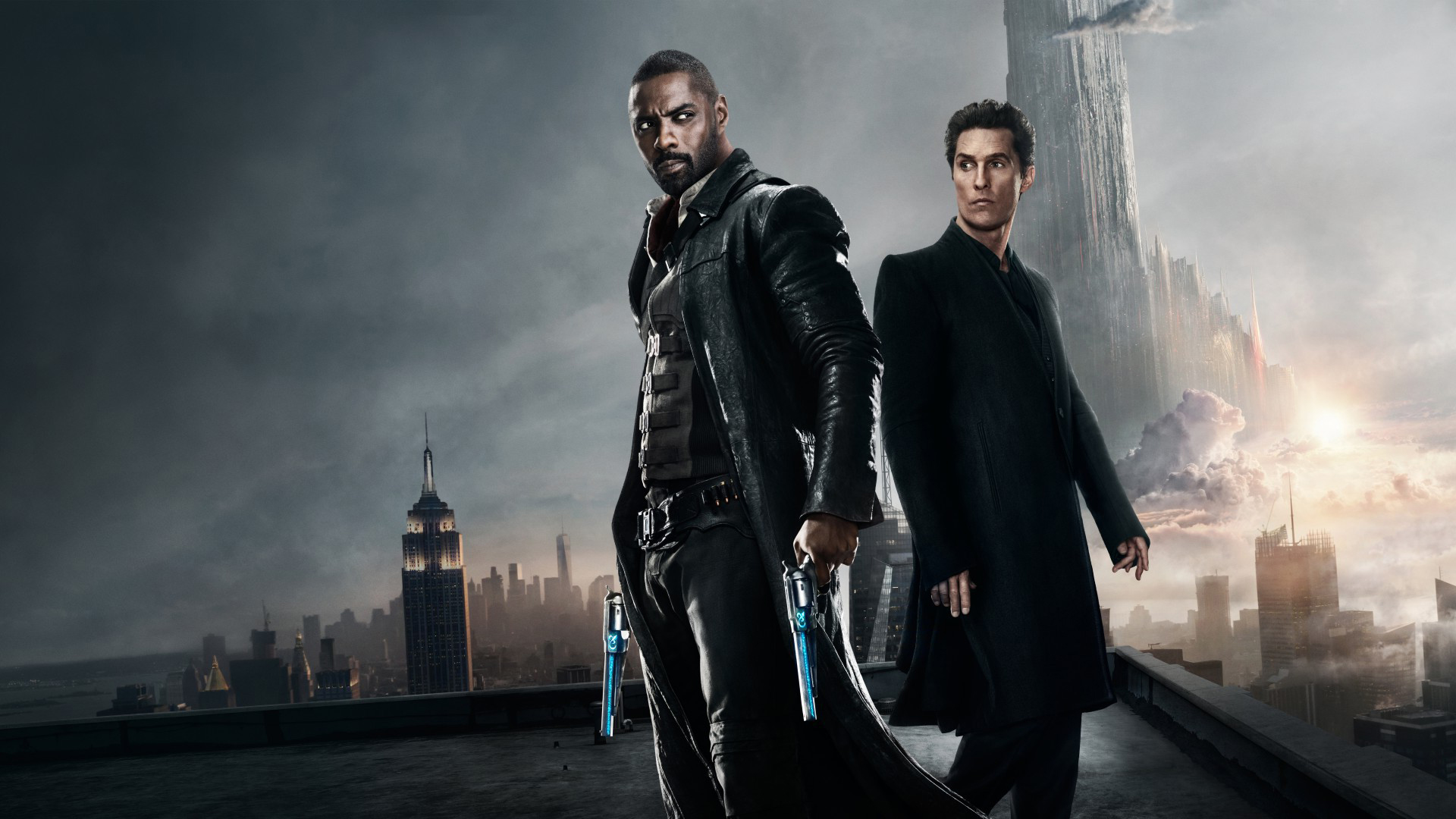 Posted at 01:37h in Opinion, Reviews by Doug Jamieson 0 Comments

Screen adaptations of beloved books are always a tricky thing. Stray too far from the source material – you’re likely to enrage the novel’s true fans. Stick too close to it – you may find what works in print doesn’t necessarily work on screen. There are adaptations that exhaustively stretch something relatively short into an epic multi-chapter franchise (I’m looking at you, The Hobbit). But the most baffling of book-to-film adaptations are those that foolishly attempt to condense something epic, like a multi-volume series of novels, into one 95-minute piece of cinema. Such is the case with the utterly terrible The Dark Tower, which is easily the most boring film of 2017 so far.

Director Nikolaj Arcel, co-writing with no less than three other screenwriters,Akiva Goldsman, Jeff Pinker and Anders Thomas Jensen, has instead condensed numerous elements and storylines from all eight novels (plus apparently invented entirely new aspects) and mashed them all together to create an utter mess of a film. I will freely admit to having no prior knowledge of the book series, but I do know Stephen King and his other works quite well. If you hadn’t told me this was based on his writing, I wouldn’t know it. It lacks, well, everything we’ve come to expect from his work, and one can only assume that’s because the source material appears to have been treated with genuine disregard.

The film starts interestingly enough, and rather darkly. The Man in Black aka Walter O’Dim (Matthew McConaughey, ending the McConaissance for good) is strapping a bunch of unfortunate chosen children into a menacing looking machine, in a parallel universe somewhere. It seems their psychic power can potentially destroy the titular Dark Tower – the only thing protecting our world, and all other parallel worlds, from impending doom via a whole host of monsters, waiting in the wings. Why is he attempting to destroy this apparent beacon of power and unleash these monsters? I have no idea. This ridiculous narrative never makes his intentions clear. If someone can tell me, without using the phrase “well, because he’s evil,” I’ll give you a medal.

Back on Earth (referred to as “Keystone Earth,” for no apparent reason), Jake Chambers (Tom Taylor) is bearing witness to The Man in Black’s evil deeds, through a series of hellish nightmares. After each “vision” (which also include a mysterious gun-toting hero and hideous creatures, hiding in sewn-up human disguises), Jake quickly memorialises his mental images into a series of drawings, which he consequently plasters all over his bedroom walls. Jake is convinced his dreams are real. Why is he so convinced? I have no idea. And nobody else is buying it either. The insane drawings aren’t exactly helping his case.

Mum thinks he’s still disturbed after his father’s untimely passing, and the nightmares are nothing but manifestations of his grief. His new stepdad (who clearly never wanted children) thinks he needs to be shipped off to the loony bin immediately. And Jake’s psychiatrist tends to agree with both of them. But Jake is adamant Earth is in perilous danger, and the real reason New York City, and other locations around the world, are suddenly experiencing a wave of unexplained earthquakes is really because the Dark Tower is under attack.

When Walter senses Jake’s intense psychic abilities, he sends the sewn-up face creature things a-knocking on Jake’s door to bring him back to his lair. Now that his dreams are confirmed as reality, Jake escapes their clutches, and hops through a portal to Mid-World, aka the land of the Dark Tower. It’s here he meets the good guy from his dreams, Roland Deschain (Idris Elba, the film’s only bright point), who just so happens to be the last of a warrior race known as the Gunslingers. It seems Roland and Walter have been battling it out for years, with Roland being somehow the only one immune to The Man in Black’s psychic abilities. Jake and Roland naturally join forces to bring down their common enemy, and set about saving the universe for good.

It’s really quite beguiling that a film apparently constructed from eight novels could contain a plot so devoid of intrigue, interest, or drama. There is a severe lack of tension with anything that occurs in this film, most notably due to the fact that no one on Earth has any idea any of these potentially apocalyptic events are occurring. Sure, some of Mid-World’s inhabitants are aware, but there’s no scope to the supposed impending doom of mankind, which leaves the audiences completely uninterested and terribly bored. There’s a way to properly craft an apocalypse film. This is not it.

The structure is overflowing with potentially wonderful set-pieces that frustratingly never come to fruition. There are hints at great things, but they seem to vanish at every turn. One such sequence, where Jake and Roland are attacked in the woods by a vicious creature, seems to be heading somewhere extremely entertaining and genuinely thrilling. It was the first sequence to really wake me up from my sleepy stupor. But it’s filmed in such blinding darkness that it’s hard to tell what on earth is even happening. And then it ends far too quickly and easily, which makes for an incredibly irritating cinema experience.

For a film with four screenwriters, it’s utterly staggering to see such horrendous dialogue being spat out by these poor actors. Practically every single line is overloaded with forced exposition, in a desperate attempt to neatly explain everything about the film’s pathetic and incoherent plot to the audience. Nobody seems to talk in a conversational tone in this world. Every sentence seems to desperately need to have some purpose for a greater meaning. Surprisingly, for a film that’s so overloaded with exposition, it still leaves so much terribly unexplained. I still have no idea what the Dark Tower actually was or how it protected humanity from complete disaster. What exactly is inside it? Is it some form of giant weapon? Or does it house an impressive army of soldiers? I hate to break it to you, but no, we don’t actually get to go inside the Dark Tower. I wish I were kidding.

The visual style of the film is horribly bleak and dull. The production design never takes us to any location remotely visually interesting. There’s nothing exciting about a fantasy film that’s mostly set in forestland and dreary, run-down interior buildings. It’s what you’d expect from a Twilight film, not a Stephen King epic. It’s like taking The Lord of the Rings and setting Middle Earth in upstate New York. It doesn’t help that Rasmus Videbæk’s cinematography is uninspired and totally bland.

But the film’s real fatal flaw is Matthew McConaughey, who is evidently doing everything he can to make us forget he won an Oscar three years ago. A fantasy film lives and dies by its villain, and this film dies a slow, agonising death at the hands of its hammy bad guy. The Man in Black is clearly meant to be the menacing and imposing figure of your worst nightmares, but in McConaughey’s hands, he’s positively ridiculous.

The unfortunate dialogue he’s being forced to deliver doesn’t exactly help matters. Even the best of actors would struggle with such a woefully written script. It also doesn’t help there’s clearly something very wrong with his emotionless and entirely immobile face (step away from the Botox, Matthew). And his hairstyle and colour, which resembles something more akin to what’s atop Christopher Walken’s head. It all combines to create a villain that’s more laughable than terrifying.

The film’s other lead, Idris Elba, is thankfully far more successful at spinning his equally unfortunate dialogue into something more impressive. He brings a heavy dose of gravitas to Roland to create a genuinely interesting character, made all the more effective by his powerful backstory. Arcel still mostly wastes an actor of Elba’s calibre, but at least Elba somehow manages to craft a hero the audience will give two damns about. If there is to somehow be a sequel (or the rumoured TV spin-off), please make him the sole focus.

The same can’t be said for Tom Taylor’s Jake, who borders somewhere between annoying and tedious. It always seems harsh to judge an inexperienced young actor, but he’s out of his depth here, particularly when called upon to show genuine grief and sorrow. Taylor and Elba work best together when Roland is eventually brought to Earth, creating some genuinely humourous fish-out-of-water style comedy, akin to Wonder Woman and Thor. Elba plays these comedic moments perfectly, and his scenes on Earth, sorry, Keystone Earth, wind up being the film’s best moments. These work far more effectively than they should in such an abysmal film.

It’s a positive this film is so relatively short. Something tells me this wasn’t exactly intentional. The film was reportedly plagued with reshoots and reworkings, after disastrous test screenings, and the final product feels ruthlessly trimmed in many places, and jarringly plumped up in others. It begs the question – what did the film look like originally, if this end result is so horrible? The final act is sped through so quickly, it’s as if this movie just wants to hurry up and let you flee the cinema. That’s if you haven’t fled already, which I genuinely wanted to do, more than a few times.

Adapting The Dark Tower was an epic undertaking, essentially doomed to fail. Many had called the books “unfilmable,” and it’s not hard to see why. Why they bothered is beyond me. There’s nothing here but a hollow, empty piece of cinema you will forget instantly. This film can’t work out what it’s trying to be, so it ultimately winds up being absolutely nothing at all.