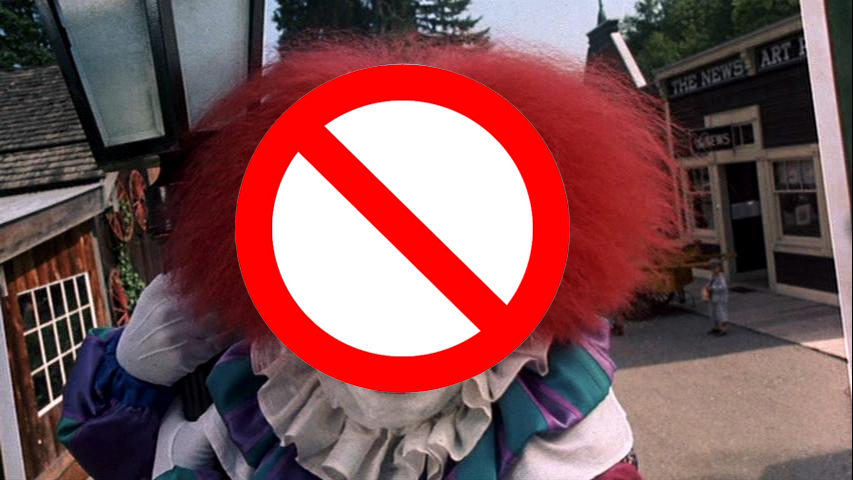 05 Sep How ‘It’ ruined my damn life – a reflection

Posted at 19:11h in Opinion by Doug Jamieson 1 Comment

As we countdown the hours until the return of Pennywise, I have to admit something – I am afraid of clowns. I fear them more than anything else on this planet. Snakes, spiders, sharks, Donald Trump. I’ll take them any day over a clown, even if the latter is the modern-day political equivalent of a clown. I am down-right petrified of them. My heart stops at just the sight of one. I will audibly scream the moment a clown appears in a film, television show, commercial or, worst of all, in-person. And, like a lot of people, that can all be traced back to the 1990 miniseries adaptation of Stephen King’s It.

As an impressionable eight year-old, the tale of the murderous Pennywise the dancing clown, as he terrorises a group of unfortunate youngsters (and doing it all again 27 years later), was not something I should have witnessed. Try telling that to young Doug though. This wasn’t my first dalliance with horror. I’d made it through Nightmare on Elm St and wasn’t afraid to go to sleep. I’d seen Friday the 13th and wasn’t afraid to still go camping. A horror story about a clown? Piece of cake…or so I thought. I was wrong. So very, very wrong. And my life has never been the same since.

For most 90s kids, experiencing a scary movie at a sleepover was a right of passage. It was supposed to help the terror be more bearable because you were in a group. You were in it together. The problem is, when the lights go out, you’re on your own. And so it was for young Doug after a viewing of It. Somehow I had managed to get through the viewing without screaming my head off every time Tim Curry appeared on-screen. But once it was time for sleep, I couldn’t get Pennywise out of my head.

That laugh. His dialogue. His outfit. The way his demeanour could change from playful friend to maniacal demon in an instant. The unforgettable images. Young Georgie being pulled into that infamous drain. The balloons bursting blood into the faces of those in the library. Pennywise, waving on the side of the road, holding a bunch of balloons, welcoming Ben back to Derry. It was all burned into my mind, and it was causing genuine terror. That terror has never left me.

It’s hard to explain a phobia to someone who doesn’t share the same fear. It’s even harder to explain a phobia of something seemingly innocent. When someone says they’re scared of snakes or spiders, you get it. Certain breeds of those creatures have the capacity to kill you with one bite. It is something to genuinely fear. Clowns are not exactly deadly, or at least not outside of a fictional setting. They’re meant to invoke laughter and delight. They’re meant to entertain and make us chuckle at their antics. But when you relate a clown as something trying to kill you, it’s not hard to see why coulrophobia is so common for many who saw It as a child.

After being so shaken by watching the miniseries, I could never bring myself to walk anywhere near a street drain (I still get a bit wary by them). I didn’t want to shower for months, for fear Pennywise would rise up from the plug hole. I couldn’t look at clothes blowing on a clothesline, without thinking Pennywise was hiding behind them. I wouldn’t go anywhere near swampy areas with water pipes, which was extremely difficult because we lived in an area with lots of swampy areas with water pipes. And, of course, anytime I saw a clown, I’d have a small panic attack.

Pennywise invaded my dreams, or, more accurately, my nightmares. He was embedded in my sub-conscience. His very existence, albeit a fictional one, caused genuine fear in my heart. And that fear remains to this day. I am still terrified of clowns. Now it’s not exactly the worst fear to have, purely because it’s not every day you see a clown. I feel for people who have a phobia of something they deal with daily, but thankfully, clowns don’t pop into my life that often. However, when they do appear, I’m that young boy all over again.

My heart races. My hands start to shake uncontrollably. My stomach flips and turns. I freeze. It’s utterly horrible. It’s easily fixed though. If one appears in a movie or TV show, I can just change the channel and they’re gone. But in person? Well, that’s a different story. Most people who know me know my phobia, and would never purposely have me experience a clown in-person. But every now and then, someone doesn’t know, and the result is embarrassing, to say the least.

For example, at my former job, someone thought it would be a cute idea to dress up as a clown at a monthly staff meeting in the boardroom, completely unaware of my phobia. They danced into the room in full Pennywise-style clown attire and make-up, with a whole bunch of helium balloons floating along side them. What did I do? Scream loudly and run into a corner of the room, of course. Luckily one of my co-workers also shared my fear, and quickly joined me in the corner, so we didn’t have to suffer alone.

And remember when that bizarre wave of clown sightings started happening last year, with people donning a clown suit and waiting by the roadside somewhere? I was genuinely concerned with travelling around town, in-case I experienced a sighting and consequently mowed the clown down with my car. Would coulrophobia have been a defence for involuntary manslaughter?

I know this all sounds ridiculous. It’s just a fictional miniseries. It’s not real. Stephen King didn’t base his book on real events. There is no basis to any of the events that occurred in the novel or the miniseries. Pennywise doesn’t exist. He’s not coming to murder me. But when you’re a child, it’s hard to separate fact from fiction, and I was never able to shake the sense he was hiding in the sewers somewhere. I’ve never been able to look at clowns the same again.

As I’ve gotten older, in some ways, I have managed to admire It for having such an impact on me and a whole generation of people. For a piece of fiction to create such a reaction is genuinely impressive, even if many have realised the production itself was actually fairly hokey. I have also come to revere Curry’s work as one of the greatest ever committed to the horror genre. His work as Pennywise is masterful, and the character is an icon of horror because of his wonderful performance.

But, to be terribly dramatic, the miniseries ruined my life. I hate my phobia. I hate how something so innocuous can create such ridiculous fear within me. I hate having to worry about attending children’s parties (my friends are now at that age of having kids, dammit) because a clown could make an appearance. I hate looking at drains and water pipes and picturing a clown hiding inside them. I hate It for giving me a reason to fear something that is not in the least bit scary to people without this affliction.

Now we stand on the dawn of a new era of Pennywise, and a new version of the story that has caused so much torment to my entire life. It hasn’t been easy seeing his image popping up all over social media or plastered on posters and billboards. In a cruel twist of fate, as a dedicated film critic, I now have to be professional and face my fears. And so…I will (reluctantly) be seeing It in cinemas this Thursday.