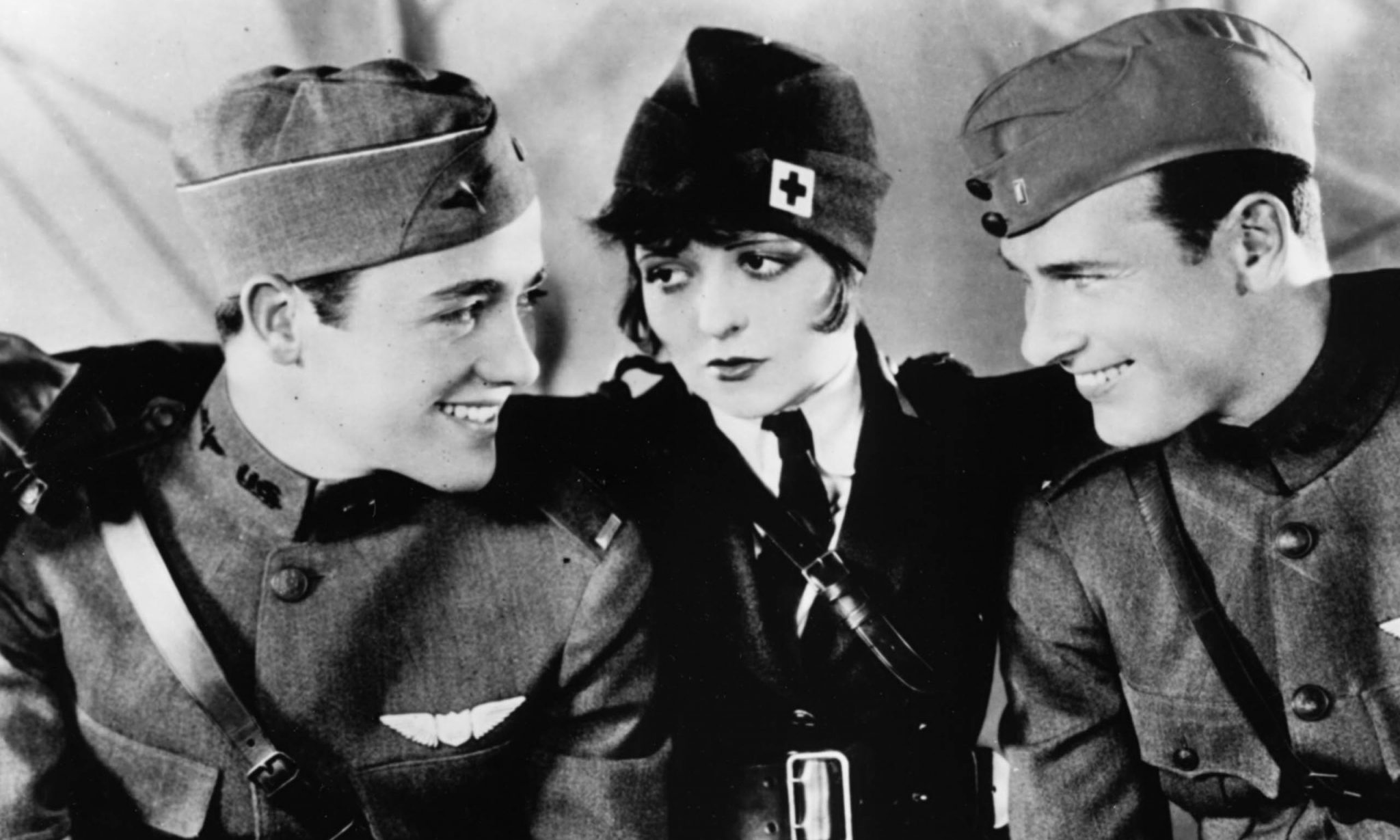 In 1929, the Academy Awards held its very first ceremony. Honouring the films of 1927 and 1928, the event took place on May 16 at the Hollywood Roosevelt Hotel in Los Angeles. Hosted by Academy president Douglas Fairbanks and lasting only 15 minutes, the ceremony was decidedly small by today’s standards, with only around 250 people in attendance. It also holds the distinction as the only Oscar ceremony to not be broadcast on radio or television.

Set during the First World War, Wings is a silent war drama that serves as a beautiful tribute to the brave and daring flying men of the Army and their incredible aerial feats. At its heart, the film revolves around Jack Powell (Charles “Buddy” Rogers) and David Armstrong (Richard Arlen), both conscripted into the US Army and both in love with the same woman, Sylvia Lewis (Jobyna Ralston). Complicating matters further is Mary Preston (the dazzling Clara Bow), who pines for her unrequited love Jack so badly, she joins the war efforts herself by becoming an ambulance driver. As we witness Jack and David become superstars of the aerial force, the film spirals towards a devastating climax, set against the backdrop of the epic Battle of Saint-Mihiel.

Why did it win?
Even by today’s standards, Wings is a monumental achievement in cinema. When you consider the meticulous precision and logistics it would have taken to craft a film like this in 1928, you can’t help but admire the talents of the filmmakers. Without the use of modern CGI special effects, the aerial battles were all created with physical filmmaking, and they are truly spectacular to behold. With some phenomenal production design and the use of hundreds of extras, the war sequences are authentic and powerful, and it only gets even more impressive when the action soars above the ground.

The aerial cinematography is genuinely stunning, as we take a bird’s-eye view to the numerous dogfights our heroes find themselves in. With swooping shots, tight close-ups, and glorious landscape photography, you feel every moment of these incredible battles, even without the bombastic sound effects work we’ve become accustomed to in the “talkies” of today. The choreography of the plane battles is gripping and exciting, and it’s the kind of edge-of-your-seat cinema that will take your breath away. Sure, it’s no Dunkirk, but for its era, it’s a damn masterpiece.

For a silent film, the acting is surprisingly effective. Even without spoken dialogue, the plot is emotional and moving. The climax is terribly heartbreaking and features some beautiful moments between the two male leads. They even share a kiss, which may well be the first same-sex kiss captured on film, even if it’s not a romantic one. Rogers and Arlen are the typical earnest American heroes who you genuinely cheer for, and El Brendel provides some hearty comic relief, as the misjudged and deeply patriotic Herman Schwimpf. But it’s Bow that steals the show, with her wide-eyed and vivacious performance. It’s impossible to take your eyes off her beautifully emotive face, and she gives such delightful enthusiasm to her performance. She’s an icon of the early days of cinema, and it’s not hard to see why.

It’s highly likely this was unlike anything the Academy voters had seen before. Wings was a spectacle that dazzled and delighted audiences, and it’s that kind of reaction to a film that makes it easy to see why it won. The film was wildly popular at the box-office, notably due to the public’s obsession with aviation after Charles Lindburgh’s first solo non-stop transatlantic flight between the US and France in 1927. It was timely and relevant, and that’s the easiest way to win an Oscar for Best Picture.

Did it deserve to win?
Absolutely. The film is a technical marvel, and it’s a phenomenal achievement of the silent film era. Even 90 years later, it’s still incredibly entertaining, and that has to be the mark of a deserving winner. It’s a beautiful tribute to the brave men and women who served their country so gallantly, but it also serves as a gorgeous salute to the early days of cinema. Wings would be the first and only silent film to win Best Picture, until The Artist in 2012, so it seems entirely fitting it would take home the Academy’s first ever prize for Best Picture.