Posted at 15:26h in Opinion by Doug Jamieson 0 Comments

Late yesterday afternoon, Amazon dropped a bombshell on Australia. From July 1, the American website will no longer ship to Australian customers, instead redirecting users to the local version of the site. This change is in response to a new Australian law coming into effect on this date, requiring all online retailers to apply a ten per cent GST to purchases made overseas and shipped to Australia. Instead of simply complying with this new law, Amazon has bizarrely decided to ban Australians from future international purchases.

To quell the backlash, Amazon has promised the Australian arm of their website will be boosted with additional products previously only available on the American site. At present, the Australian version pales in comparison to the millions of products available on the US counterpart. It’s a token gesture which means absolutely nothing to Australian movie fans who have used Amazon for years to purchase American DVDs and Blu-rays. These will not be added to the Australian site, as it will continue to only carry locally-released editions. And it’s left me utterly furious.

Now, I know what you’re thinking. Can’t people just buy the local version of the DVD or Blu-ray? Sure, they can. In many cases, that’s absolutely true. Australia does indeed receive the majority of new releases films sold in America. My disturbingly-large DVD and Blu-ray collections are filled with many titles purchased right here at home. But the majority were not, and there’s a whole host of reasons why: none of which have anything to do with pricing.

I’m sure a lot of people shop online with overseas retailers purely to access cheaper prices. While at first glance, DVDs and Blu-rays do seem far cheaper on the US version of Amazon. However, once you factor in currency conversion (a US$23.99 Blu-ray is about AUD$30) and shipping costs, it either works out about the same as buying locally or, more often than not, slightly more expensive. I’ve personally been purchasing films this way since 2004. Oh, yes. Almost 15 years and literally thousands of dollars of business for a company which has now unceremoniously barred me. But if it isn’t any cheaper, why do it?

There really are a whole host of reasons many movie fans like myself have been choosing to purchase films from the US for years. In terms of new releases, America generally is the first market in the world to begin selling a major new title. Sometimes, this can even be months before it arrives in Australia. Yes, months. For example, last year’s sublime Lady Bird was released on Blu-ray in the US on March 6. We’re still waiting for it to be released here, with the Australian Blu-ray release set for June 13. That’s a 14-week gap. Almost 100 days.

In this day and age of piracy and torrents, asking a major commercial market like Australia to wait three months to purchase something is ludicrous, particularly when people of that market are willing to do the right thing and purchase the film legally from overseas, as opposed to just stealing it online. Amazon may not see it this way, but their decision to cease international Blu-ray orders will only push people towards illegal film downloads even more.

Then there’s the issue of product availability. There are hundreds, if not thousands, of films available on DVD and Blu-ray in the US that simply aren’t released in Australia, particularly older titles and films of the independent and foreign genres. Dozens of classic films are not within reach through local retailers. The majority of Best Picture winners are not available on either DVD, Blu-ray, or both in this country. Case in point – Gone with the Wind is not currently purchasable on Blu-ray and the DVD has been discontinued. Just let that sit for a second. One of the biggest films of all time is not currently available to purchase in Australia. The breadth of Amazon’s immense library of film titles just isn’t available outside the US. There is even an entire series of glorious Blu-ray special edition re-releases we do not receive here.

The Criterion Collection is an American home entertainment distributor who aim to re-release important pieces of cinema through a series of special releases, with a focus on restored cuts of the film and adding sensational new bonus features like commentary tracks and making-of featurettes. These beautiful Blu-ray releases are a film fan’s dream. They are amongst some of my most prized possessions. The company do not distribute outside the US, nor do they have a subsidiary agreement with a local Australian supplier, so import is the only way. That avenue just became a whole lot harder.

Finally, and this is more a personal preference, but the major reason I’ve been shopping on Amazon for almost 15 years relates to DVD and Blu-ray cover art and packaging. Now, this is getting a little pedantic, but Australian releases carry a garishly-coloured classification logo on the front of every release. These designs were implemented in 2005 to stand-out on the cover so that parents can make better-informed choices on purchases for their family. Fine. However, in my opinion, this ruins the entire cover. It looks downright awful. Here’s a little comparison to highlight my point. 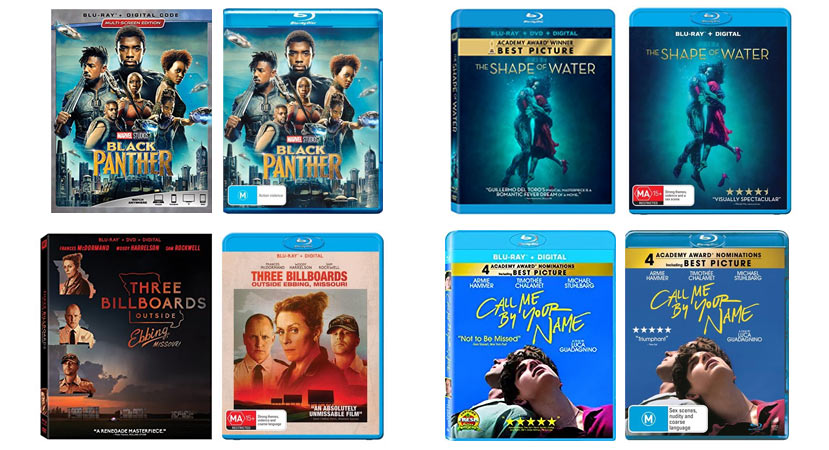 For a film collector, the Australian covers are just not desirable. At all. It’s not something you want on your Blu-ray shelf. Many of the American releases also include a snazzy cardboard slipcover to sit over the plastic case. Australian releases never get these. It’s just another little element America does better than Australia. But it goes to a new level when you look at boxset packaging. Australian boxsets are generally released in a simple cardboard box containing the films inside, housed within their standard plastic cases. It’s more a “collection” than a “collector’s item.” But America tends to up the ante on their boxset releases, crafting something genuinely special and collectable. Here’s one example.

After Phase One of the Marvel Cinematic Universe was completed, Disney released a boxset collection of all six films. In America, this was housed within a metal briefcase featuring a light-up replica of the tesseract and a whole swag of bonus collectable goodies inside. As you can see, the Australian edition paled in comparison. It was just a box with six films inside it. And that garish classification logo. Which one do you think a film collector or Marvel fan would want to go for? This is just one example. There are many others. Australia goes simple on these things, and that’s fine. But Amazon has always been there to provide an American alternative for those who long for something more.

Look, I know this is all a huge first-world problem. There are bigger issues facing the planet right now than a company stopping international trade with Australia. But films are my life, and this Amazon decision feels like a huge slap in the face for a movie buff who has supported this company for such a long time. I adore my DVD and Blu-ray collection. I love how it looks, even if it means sacrificing a vast amount of space in my home. I cherish the boxsets, special editions and collectable items I have procured over the years. The ability to continue growing that collection is made far more difficult by losing access to Amazon.

Of course, there will be workarounds. People are already suggesting the use of a VPN and mail-forwarding service will help bypass this frustrating decision. Regardless, it’s a whole stack of extra steps which penalise those who happen to live in a country outside of America. We Australians already feel like we live on the moon. This just makes us feel even further away. It seems as if Amazon wants to punish the Australian government for this taxation decision, but, in the process, all they are doing is punishing thousands of customers who’ve done nothing wrong.