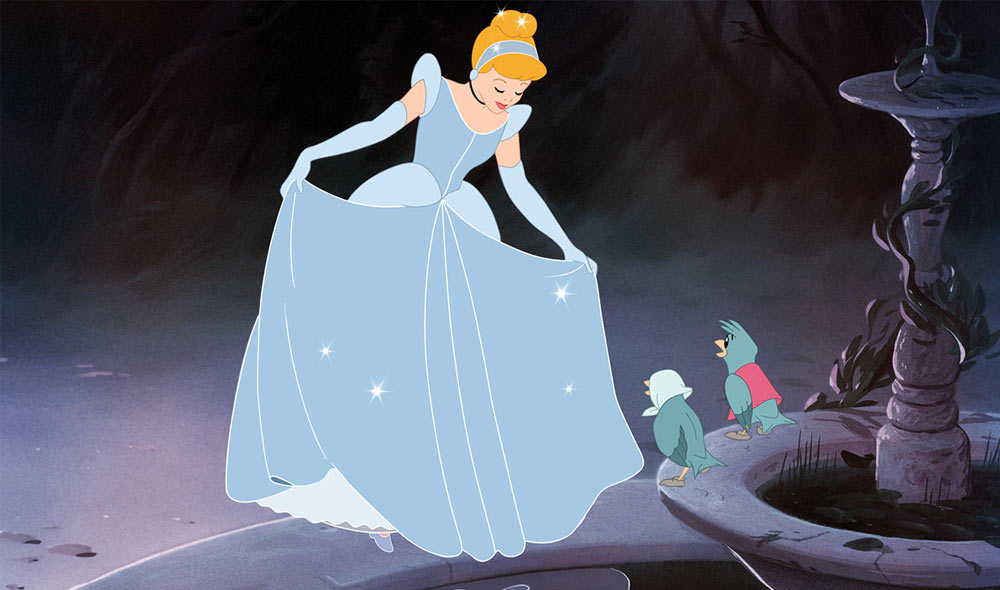 Posted at 12:51h in The House of Mouse Project by Doug Jamieson 6 Comments

The one that recaptured the magic.

After almost a decade of subpar, inexpensive package films, Walt Disney Productions was genuinely on its last legs. While the series of anthology movies had kept the studio’s head slightly above water, Walt Disney knew the general public’s interest in these disappointing films was severely waning. With the studio’s bank debt pushing below $4 million, Walt also knew he had one final shot to rescue Disney from total collapse.

In a meeting with his financiers at Bank of America, Walt acknowledged the bank’s desire for tighter economic restrictions within the studio, but stressed a continuance of their refusal to finance feature-length animated films would surely see the studio’s demise. Walt begged for the chance to return to producing the feature films which had made the studio such a success in the 1930s. Thankfully, they finally relented. The long-awaited revival of Walt Disney Productions was finally beginning to take shape.

By late 1947, Walt already three feature-length animated productions in development; Peter Pan, Alice in Wonderland, and Cinderella. With only one shot to regain the public’s attention, Walt rationalised the studio’s return to feature-length animation needed to recapture the magic of Disney’s early heyday of Snow White and the Seven Dwarfs. As such, he deemed the only production worthy of such an opportunity was Cinderella, given it contained similar princess and fairy tale elements to Disney’s groundbreaking debut animated feature film.

Walt also saw the potential in Alice in Wonderland, a colourful adaptation of Lewis Caroll’s beloved children’s book series, which was greenlit and placed into pre-production at the same time as Cinderella. Walt assigned his nine best animators, who later became known as “Disney’s Nine Old Men,” to work on Cinderella and oversee Alice in Wonderland, with the two films essentially battling it out to see who would finish first and take the release spot on the schedule.

By early 1948, production on Cinderella had progressed further than Alice in Wonderland, leading to Walt’s decision to confirm the former would take the coveted slot as Disney’s first feature-length animated film in eight years. Unlike past animated productions, the budget of Cinderella would be far tighter, with Walt desperate to keep production costs as low as possible to boost the film’s chances of turning a profit and resurrecting the entire animated feature film department.

To assist with lowering the animation cost of Cinderella, Walt commissioned live-action recreations of most of the film’s scenes to be used as references for the film’s animators. From here, the footage was edited frame-by-frame onto large sheets for the animator’s to essentially trace over. In the end, this mostly formed the skeletal basis for the work of The Nine Old Men, with most of the animation team finding the process far too restrictive to their artistry and exaggerating and elaborating on the live-action references in their own unique ways.

While earlier Disney animated films were known for their extravagant and detailed backgrounds, Cinderella utilised more basic background illustrations to avoid the need for excessive colouring and detailing that would increase the film’s budget. This is particularly evident in the background drawings of the Prince’s castle, which almost stands like a blue-hued ghost than a dazzlingly detailed castle.

In almost every scene in Cinderella, a maximum of two characters are moving at any given time, which further reduced the need for additional animation work and production time. While Disney had pioneered the multi-plane camera technique to sweep through multiple background layers, Cinderella mostly features scenes with a static background with only the characters moving within each latent shot.

Given its now-classic standing within the Disney canon, the basic visual aesthetic of Cinderella is often overlooked, but the film truly does stand as one of the most simply crafted Disney animated films of this era. That’s likely due to one simple reason; the film’s more elaborate shots are the ones you likely remember. To boost both the fairy tale and romance elements of the film, the sequences featuring Cinderella’s dress transformation and her sweeping dance with the Prince were more intimately animated, creating moments that firmly stick in your memory. Fun fact – Cinderella’s transformation scene was widely reported to be Walt’s favourite piece of Disney animation ever created.

After years of package songs devoid of the musical delights found in Disney’s earlier films, Walt knew Cinderella needed to recapture the magical fusion of music and animation which stood as a hallmark of his earlier films. During early pre-production, Walt enlisted Snow White and the Seven Dwarfs lyricist Larry Morey and music director Charles Walcott to compose the film’s songs, but was ultimately dissatisfied with the compositions the duo created. Thus, all six songs were tossed in the bin.

In mid-1948, Walt sought out Tin Pan Alley songwriters Mack David, Al Hoffman, and Jerry Livingston after hearing a song they had written on the radio. The trio would become the first professional songwriters to be hired from outside the Disney studio, ultimately crafting 10 songs for the film’s soundtrack. The film would be scored by Oscar-winning Dumbo composer Oliver Wallace, with the score only being completed after the animation was finalised; a first for Disney who typically had crafted their film scores during the animation process.  In another first for Disney, the Cinderella soundtrack marked the first commercial release from the newly-created Walt Disney Music Company.

Production on Cinderella was completed on October 13, 1949, with Walt giving his final tick of approval to a film that genuinely held the fate of Walt Disney Productions in its hands. The film held its lavish premiere in Boston on February 15, 1950, before a wide release on March 4, with Walt holding his breath for his last roll of the dice. The response from both critics and audiences was overwhelming, to say the least.

With rave reviews across the board, Cinderella was the best-received film Disney had produced in years, with Time magazine declaring, “Cinderella is beguiling proof that Walt Disney knows his way around fairyland.” Oscar-winning director Michael Curtiz, the man responsible for a little film called Casablanca, even wrote Walt a personal letter hailing Cinderella as “the masterpiece of all the pictures you have done.” The film would go on to receive three unsuccessful Academy Award nominations for Best Sound Best Music, Scoring of a Musical Picture and Best Music, Original Song for “Bibbidi-Bobbidi-Boo.”

But it was the public’s reaction to the film which truly confirmed the unprecedented success of Cinderella. The film was the biggest box office success for Disney since Snow White and the Seven Dwarfs, earning over $8 million in gross rentals and standing as the sixth highest-grossing film of 1950. With European markets now open for business once more, Cinderella was equally successful internationally. To this day, Cinderella still stands as the 16th biggest film of all time in France where it sold 13.2 million tickets.

If the box office success of Dumbo in 1941 saved Walt Disney Productions from bankruptcy, Cinderella proved miracles could occur twice. The success of the film elicited the much-needed funds to save the studio from total collapse. Much like Dumbo, if Cinderella had ultimately failed, Walt’s daring dream would be over and nothing we know of Disney would exist today.

Flush with cash, Walt was able to finance a slate of both animated and live-action productions that would see the studio flourish over the next two decades and become one of the titans of Hollywood. The profits from Cinderella allowed Walt to establish his own distribution company, expand into television production, and commence construction on a little theme park you may have heard of called Disneyland.

Cinderella was cleverly marketed as the “greatest since Snow White,” which clearly helped whet the public’s appetite after being starved of the wonders of Disney feature-length animation for close to ten years. While it’s debatable if Cinderella was Walt’s greatest film since his debut work, it firmly reestablished the studio as the home of family-friendly entertainment and the masters of the art that is animated film.

We could quibble over the lack of characterisation within Cinderella, especially the terrible lack of depth given to its titular heroine or the inescapable fact the film falls back on the outdated trope that a woman’s only goal in life should be to find a man to love her. But Cinderella stands as a product of its time and it’s hard to resist another saccharinely-sweet Disney fairy tale that sought to remind us to continue following our dreams, no matter how shallow they may be.

Is Cinderella a Disney Classic? Once again, Disney somehow saved itself from collapse and Cinderella was the film to reinstate the studio to its rightful place atop the land of Hollywood. It may be a simple film, but it’s absolutely a Disney Classic.