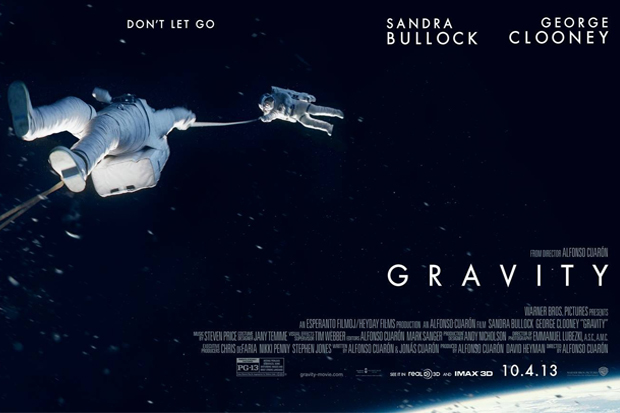 27 Feb The case for Gravity

Posted at 14:01h in Awards Season by Doug Jamieson 0 Comments

Alfonso Cuarón’s masterpiece Gravity has dominated the nominations this year, leading the pack with 10 nods. Unless some sort of insane backlash occurs, it will likely take away all the tech awards like Cinematography, Sound and Visual Effects, but can it break the curse and become the first sci-fi film to win Best Picture? Here’s why it could drift off into space with the big prize.

The chance to make history. The Academy Awards are very traditional, there’s no denying that. Each and every year, they can tend to follow the same old pattern, and award the most Oscary film of the year with Best Picture. But every year, they have the chance to make history by awarding a film that doesn’t necessarily follow that Best Picture formula. Films that fall outside the standard weepy drama film, like action, special effects heavy, 3D, science-fiction, fantasy, or even just films dealing with something ultra modern. Most of the time, they don’t. Hugo loses to The Artist, The Social Network loses to The King’s Speech, Brokeback Mountain loses to Crash. But sometimes they do. LOTR: Return of the King beats Mystic River, Chicago beats The Pianist, The Departed beats Babel. This year, the voters face that same prospect – Gravity, the 3D, special-effects heavy, science-fiction colossus that has actually made money vs 12 Years A Slave, the dramatic real-life story that touches on a shameful moment in American history. The obvious choice would be the latter, but the Academy could finally make a statement that science-fiction or special-effects are not dirty words, and award Gravity with Best Picture. Star Wars couldn’t do it, E.T didn’t get there, Avatar fell short, but Gravity could finally break through.

The ballot vote effect. Imagine you’re a lucky Academy member. You’ve got your Oscar ballot in front of you. You’ve ticked down your votes for all the categories, and notice you’ve voted for Gravity an astonishing seven, maybe even eight times, and then you get to Best Picture…the tick for Gravity happens almost absentmindedly. I know this theory is essentially saying Oscar voters are robots, and don’t particularly give a huge amount of thought to their votes…but you know it’s somewhat true. Voting a huge amount of times for the same movie tends to give the impression that the sum of its parts make it the best film, so why shouldn’t it also get the final big vote too? What is the best film if not being the best in all facets of film-making? This also carries over to splitting the vote for Director. Typically in the past, Director and Picture matched up. Given it’s practically a certainty that Cuarón will get the Director nod, a huge chunk of people won’t feel right not voting for his picture as well. A film doesn’t direct itself, so how can you possibly vote to say a director did the best job, but his film still wasn’t the best of the year?

The lack of controversy. Almost every film in the running for Best Picture has some sort of controversy behind it, and the mud-slinging began almost as soon as the nominees were read out. American Hustle and The Wolf of Wall Street glorify criminals. Philomena is anti-Catholic propaganda. Captain Phillips and Dallas Buyers Club deviate their true stories too far from the actual truth. 12 Years A Slave had some questioning the historical accuracy of Soloman’s life. But then there’s Gravity, barely a sniff of controversy at all. Yes, there were those real astronauts who came out saying it wasn’t entirely accurate, and that Bullock should have been wearing an adult diaper under her spacesuit (I’m still scratching my head over that one…), but these criticisms are not going to stop a voter from giving it their tick. No one will feel dirty voting for Gravity. No one will feel like they’ve awarded a film that is tainted in some way. That can honestly be the difference at the end of the day. Oscar voters like to feel like they’ve done the right thing, and mud-slinging came help make that decision.

Will Sandra Bullock and Alfonso Cuarón float off into space with the Best Picture trophy? Am I actually predicting Gravity to win? Find out a little closer to Oscar night…