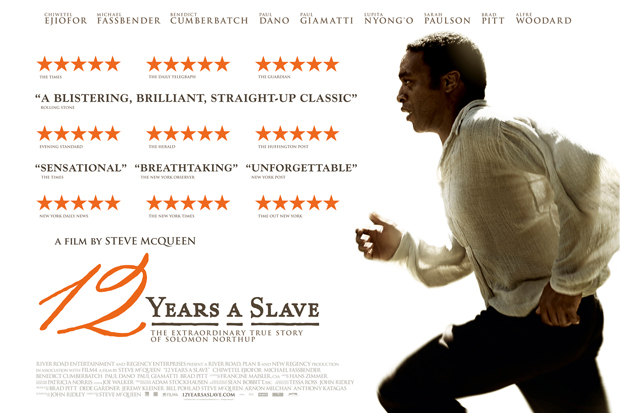 Posted at 13:21h in Awards Season by Doug Jamieson 0 Comments

The film to dominate this awards season has really been 12 Years A Slave. While there hasn’t been a clear frontrunner, Steven McQueen’s powerful film has been the closest to claiming that title. It doesn’t have the most nominations, which admittedly is unusual for a frontrunner, but it has the most prestige about it, and seems to be the stand-out choice this year. Can it make history and claim the big prize? Here’s why it could happen.

It’s time. That’s the campaign slogan the studio has been running with for the film’s final ‘for your consideration’ advertisements. While this wording is purposely vague, and could mean all sorts of things to different people, it’s fairly obvious what they’re trying to say here: it’s time that a black film won Best Picture. And don’t deride me calling it a “black film”. Everyone else is. To expand on that fairly gauche notion, it’s time for a film with an African-American lead character, in a story about African-Americans, written by an African-American and directed by an African-Brit, won the award for Best Picture. To be honest, I find the campaign a little tacky, as it basically reduces the film to just being a black film and nothing else, but as I’ve said numerous times before, the Academy loves to make history. It’s been 13 years since the Academy made history by anointing Halle Berry as the first African-American to win Best Actress. Perhaps the studio is right, and it IS time they awarded an African-American film with Best Picture.

It’s the only important film. All this year’s nominees are great films, and they all have a great story to tell, but no other nominee this year tells as important a story as 12 Years A Slave. Gravity breaks new ground visually and delivers an incredible cinematic experience, American Hustle crackles with an amazing script and four stellar performances, The Wolf of Wall Street showcases one of the finest actors in the world working again with one of the finest directors, but none of them encapsulate something important in history like 12 Years A Slave. Slavery is one of the most shameful chapters in American history. It has been portrayed on the screen many times before, but never like this. Never from the personal perspective of a slave, and a wrongfully imprisoned slave at that. The film doesn’t shy away from the uncomfortable true nature of what it was to be a slave. The beatings are severe, the treatment is disgraceful, the despair is unrelenting. This is an important film. It demands to be acknowledged. Voters will struggle to overlook that.

The powerhouse ensemble, and the Pitt factor. While American Hustle may have taken the prize for Ensemble Cast at the SAG Awards, the sheer size of 12 Years A Slave’s ensemble is hard to ignore. Hustle had four powerhouse performances, but essentially 12 Years has six, maybe even seven truly wonderful turns. Everyone is at the top of their game, from Ejiofor, Nyong’o and Fassbender, and even into the smaller roles like Paul Dano, Paul Giamatti, and Sarah Paulson. A wonderful ensemble performance can speak volumes to voters. It worked for Shakespeare In Love, Chicago and even Argo, so it could work just as well here. When one performer doesn’t meet the grade, it hurts the entire film (I’m looking at you Russell Crowe…), but there are no dull performances here. No one lets the team down. Add to that, the Brad Pitt factor. Not only is he part of that ensemble, he is also one of the film’s producers. That means, if the film wins Best Picture, Pitt is finally awarded an Oscar. Sure, Pitt doesn’t have the Leo internet meme campaign behind him, but you can’t deny he’s been long overdue to win one. Seeing him standing up there is hard to resist.

Can 12 Years A Slave create its own piece of history, and become the first African-American film to win Best Picture? Does it have the might to take down the Gravity juggernaut? Am I predicting it to win Best Picture? Find out in my final predictions for all major categories tomorrow…