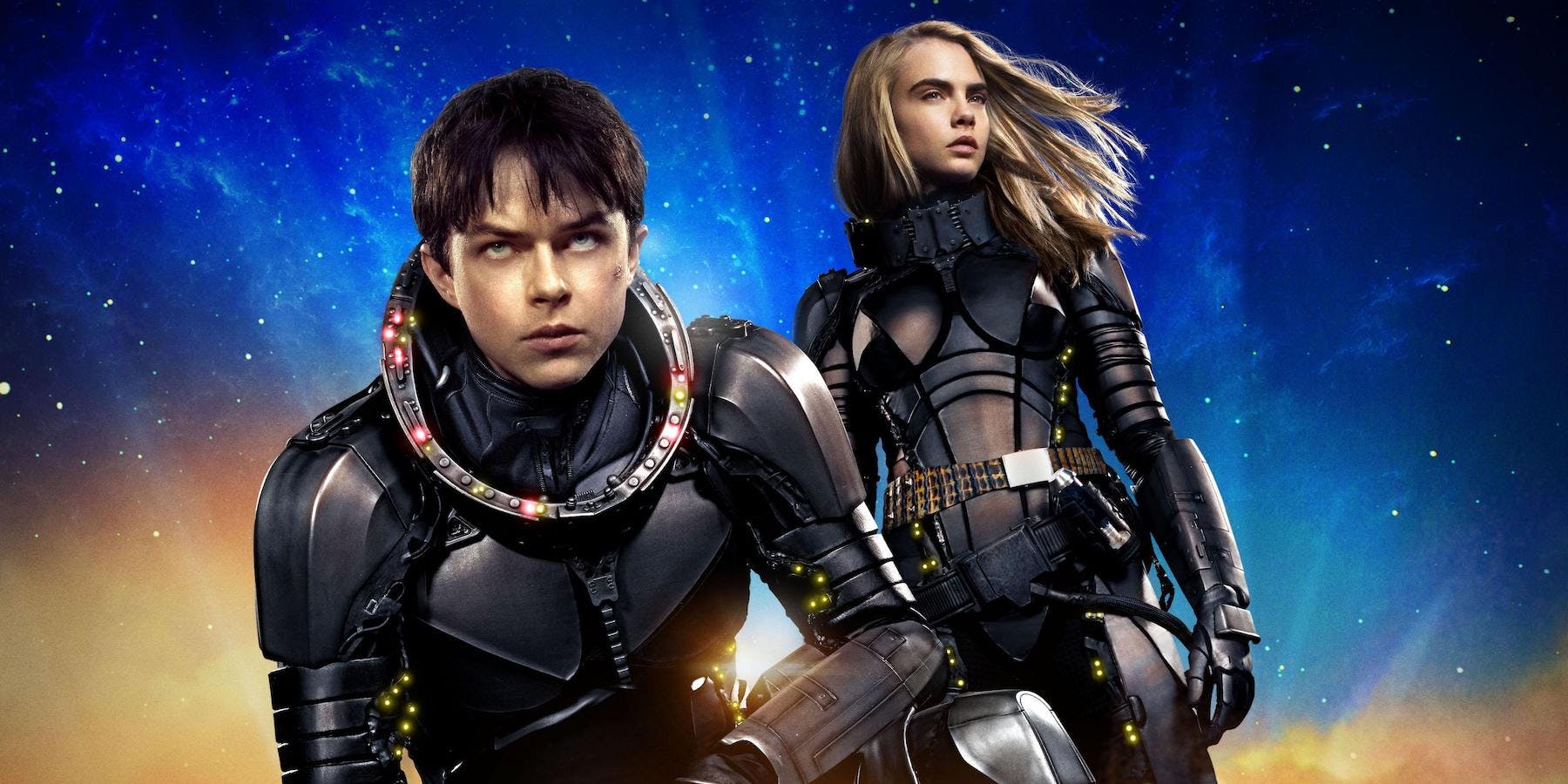 22 Aug REVIEW – ‘Valerian and the City of a Thousand Planets’

Posted at 02:48h in Opinion, Reviews by Doug Jamieson 0 Comments

Green screen. It can be a brilliant tool to enliven a well-constructed film. It can be a goldmine for any director to wisely and deftly utilise, in many different ways. It can also be a film’s complete and utter downfall when it’s relied on too heavily. Visuals are obviously an important part of cinema. It is, after all, a visual artistic medium. But it’s staggering to still find filmmakers (especially an esteemed one like Luc Besson) in 2017 failing to understand dazzling visuals are not enough to create an effective and engaging piece of cinema. We, the audience, deserve more.

Making your eyeballs explode with nauseating wave after wave after wave after wave of CGI-crafted worlds and creatures is one of the main reasons George Lucas’ Star Wars prequel trilogy was such a colossal disaster. Making those films even more insufferable were the two wooden lead actors, apparently madly in love with each other, despite any semblance of actual chemistry or a developed relationship arc. Well, here comes the god-awful Valerian and the City of a Thousand Planets to make those films look masterful by comparison on both counts. Yes, it’s that bad. Worst of the year bad.

I’m remiss to even bother explaining this film’s narrative plot (or lack thereof) because it is genuinely inconsequential to the film itself. Writer/director Luc Besson hasn’t seemed to bother putting any effort into constructing a cohesive storyline for this film, so why should I bother putting any effort into trying to explain it? Alas, a movie review requires certain elements, so away we go.

Based on the comic-book Valerian et Laureline, created by Pierre Christin and drawn by Jean-Claude Mezieres, Valerian and the City of a Thousand Planets begins promisingly with an impressive opening montage, set to the smooth tones of David Bowie’s “Space Oddity.” We witness the evolution of intergalactic friendships, and the birth of Alpha, aka the titular City of a Thousand Planets. Beginning with American and Russian astronauts joining together on the International Space Station, we then see numerous other nations (China, India, etc.) also joining together in outer space, each meeting with a friendly handshake.

As the centuries pass on, the meetings become much more extraterrestrial, as visually impressive alien creatures from other galaxies begin to join the program. Alpha, and its overcrowded mass of various spaceships and lifeforms, proves too much for Earth’s orbit to bear. So, it sets off on a fantastical journey to boldly go where no man has gone before…or to infinity and beyond…or something.

Cut to 400 years later, and we’re now on the beachy, Ibiza-esque, paradise planet of Mül, populated by a race of androgynous, iridescent, bald, blue aliens, who seem like a supermodel upgrade of the Nav’i from Avatar. The slender Mül people spend their days dancing about the surf, wishing each other good tidings, and collecting pearls to feed to a cute little lizard thing, called a Mül Converter, who then promptly (and quite disgustingly) excretes a bunch of smaller pearls to give back to the planet…or something.

Their peaceful, idyllic life is torn apart when the skies above them bring wreckage from a battle occurring above their atmosphere, which inevitably leads to the planet’s complete destruction, for some reason. We’re suddenly brought out of this disaster by Valerian (a horribly miscast Dane DeHaan) waking up from these visuals, as if they were a dream. Does that mean the end of Mül was just some horrible nightmare? Or was it perhaps a desperate interstellar call for help? Were the Mül people all wiped out? Did any of them manage to survive? And if so, where are they now? Does anybody really care, either way?

Our hero Valerian and his partner Laureline (“actress” Cara Delevingne) are taking a break from their roles as soldiers for the United Human Federation. After some horrendously written dialogue to apparently establish some sort of forced romantic connection, the pair receive the details of their next mission from the Defence Minister (Herbie Hancock…yes, Herbie Hancock). It seems there is still one surviving specimen of the assumed-extinct Mül Converters, and the duo’s superior officer, Commander Arün Filitt (Clive Owen), desperately wants it. Does he have ulterior motives for the little guy? Is there more to the extinction of Mül than he’s letting on? And what is to be made of the emergence of an unknown threat at the core of Alpha? Is it all somehow connected? Once again, does anybody really care about any of this?

If the “plot” sounds rather convoluted and annoyingly ridiculous, you’re right. It is. I challenge anyone to summarise the basics of this film in less than 30 words. Part of this film’s biggest failure is its terrible screenplay, written solely by director Luc Besson. English is not Besson’s first language, so having him write an entire English screenplay on his own was always going to be a recipe for disaster. If only at some point another screenwriter could have injected some help here, the film may have avoided being the narrative mess it sadly is. The dialogue is utterly atrocious, particularly from the two leads, and the storyline constantly zig-zags so jarringly, it’s genuinely impossible to summon any shred of interest or care for anything that’s happening on-screen, besides the impressive visual elements.

Valerian and Laureline’s journey takes so many tangential detours and pit-stops, it’s genuinely difficult to remember what on earth their real mission actually is. The narrative feels like it’s been written by your senile grandpa, as he tediously recounts some epic war story from his youth, but keeps getting distracted by random side memories along the way.

Like the time he went to a red-light district and encountered a crazy pimp and his pole-dancing prostitute. But in this film, the pimp is a wild cowboy named Jolly (Ethan Hawke, who’s better than this) and the prostitute is a shape-shifting, translucent blue alien called Bubble (Rihanna, who’s not better than this). While Rihanna is naturally gorgeous to watch, and her dance number and its numerous costume changes are a wonderful display of digital mastery, the entire sequence is insanely out-of-place, and carries on far longer than it needs to.

There really is just no rhyme or reason to the film’s incomprehensible structure. Every sequence feels more like a different level from an overstuffed video game the audience is forced to watch, rather than actually enjoy. None of them are cohesive, and none of them seem to connect as one piece of cinema. Our main characters zoom around different worlds with such velocity that we never get a chance to fully enjoy any of them. Valerian literally smashes through a whole swag of different alien environments at one point, and you just want to scream for him to stop for a second, so we can actually see and experience each one properly.

It feels like Besson’s design team came up with too many storyboard ideas for this film, and instead of picking the best ones, he’s just stuffed them all in, which actually makes the film seem entirely devoid of anything of substance. In saying that, when the characters do actually pause for a moment so we can take it all in, the design work is breathtaking. But it’s ultimately just too damn much, and instead of being dazzled, you wind up feeling incredibly exhausted and entirely bored.

Much of that exhaustion and boredom also falls with the two lead actors. Dane DeHaan is a wonderful actor. His work in Chronicle was fantastic, and he was one of the few bright spots of the failed The Amazing Spider-Man reboot. But those films showcased him as the nerdy, outsider who’s constantly dancing with villainy. And that’s the box he belongs in. Busson casts him here as a cocky, ladies man with a “playlist” of past conquests on his record, and as a strong soldier with a reputation known throughout the galaxy. Miscast is an understatement.

As Valerian, DeHaan has absolutely no charm or charisma, so his attempts at a Han Solo-esque suave character come off entirely creepy and horrendously smug, particularly given DeHaan’s penchant for monotone and understated dialogue delivery. This style of character needs boundless energy and a cheeky playfulness about them, much like what Chris Pratt gives us in Guardians of the Galaxy. But DeHaan starts the film waking up from a dream, and seemingly spends the remainder of the film still half asleep, and desperately wanting to go back to sleep. It’s hard to root for a character like that. Roll over, Valerian. I wanna go to sleep too.

Perhaps an even worse piece of miscasting is Cara Delevingne as Laureline. Yes, She is strikingly beautiful. But after a handful of films under her belt, Delevingne still has no idea how to act. Stop casting her in movies. Please. The woman is as stiff and flat as a brick wall. This actually makes her performance in Suicide Squad look wonderful. Every single piece of dialogue feels like she’s just doing a bored read-through of the script in a rehearsal studio somewhere. There is nothing to her performance. Nothing. No character development. No inflection to her delivery. No sense of how to convey emotion. It’s as dull as performances get. It still stands to be seen if Delevingne can be more interesting than just a pair of eyebrows, which get a major workout in this film, as she constantly sighs and rolls her eyes throughout. Luc Besson may have turned Milla Jovovich from a supermodel into a star actress in The Fifth Element, but even he can’t seem to work that magic on Delevingne.

Together, these two are completely wrong together. They have zero chemistry. Zilch. Their “love story” never feels quite right. They actually feel (and look) more like brother and sister than star-crossed lovers. It doesn’t help they’re acting in a room full of nothing but green screen. They both seem completely lost by this style of filmmaking. It also doesn’t help that Besson has no idea how to write effective romantic dialogue for them. Valerian awkwardly bumbles out bizarre confessions of love for Laureline, which never land anywhere than right on the ground. If he’s meant to be an epic ladies man, how the hell can’t he even produce a single great one-liner to win a girl over? Laureline actually seems to hold quite a lot of disdain for him throughout the entire film…well, that is until towards the film’s conclusion, when she suddenly flips for him out of absolutely nowhere.

Luc Besson clearly had the best of intentions with Valerian and the City of a Thousand Planets. Hiding somewhere in this overstuffed mess is a great film. Change the cast and rework the script, and it might have been a masterpiece. This has all the hallmarks of a sci-fi classic, but it’s not what we’re given.