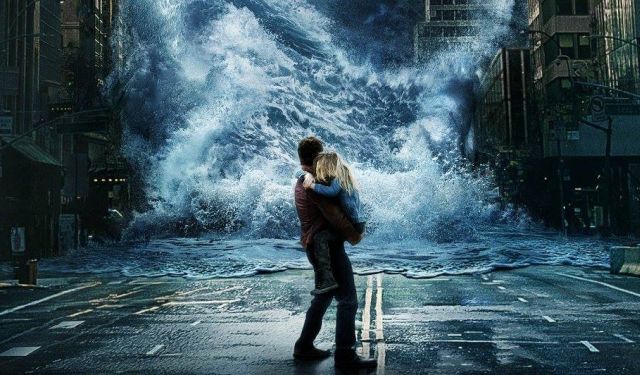 Posted at 05:00h in Opinion, Reviews by Doug Jamieson 1 Comment

Disaster movies are a dime-a-dozen. We’ve seen the world be destroyed in every way conceivable over the last several decades. And they serve a great place in the rich history of film. But for every gripping, thrilling masterpiece of destruction cinema, there’s a litany of awful examples to make you groan. Unfortunately, this year’s serving of the latter is Geostorm, a film plagued by reshoots, re-edits, and release schedule changes, and a film so horribly ill-timed, it’s a wonder it was ever released in the first place.

In the year 2019, Al Gore’s predictions of catastrophic climate change have all but come true, with the Earth suffering a relentless onslaught of epic natural disasters. To combat this, 18 countries, lead by chief-architect Jake Lawson (Gerard Butler), join forces to commission a high-tech defense system of climate-controlling satellites, bizarrely nicknamed “Dutch Boy”. There is a reason for this. Something about a children’s fable of a dutch boy who stuck his finger in a leaking dike. Regardless, every time anyone in the cast says “Dutch Boy” with a completely straight face, you won’t be able to help but giggle.

Despite essentially saving the entire planet with his creation, Jake is hauled before a congressional meeting, grilled endlessly over his apparent dissent (with an impending mega-storm on its way to south-east Asia, he switched it on before they said he could, saving thousands of lives in the process), and consequently fired and replaced by his own brother, Max (Jim Sturgess). Talk about ungrateful.

Jumping forward to 2022, Dutch Boy is now fully-operational, and able to send a cache of rockets or a high-powered laser into any major weather disaster to instantly send it away. Where does it go? How do the rockets/lasers work exactly? Oh, that’s far too sciencey for this movie. We’re not here for a physics lesson. It works, somehow. That’s all we need to know, apparently.

But something is amiss with Earth’s new savior. A freak deep-freeze decimates a small town in Afghanistan. An extreme temperature increase causes a massive gas line explosion in Hong Kong. It seems Dutch Boy is having a few malfunctions, with disastrous results. But is it a design flaw or is there something more sinister at play? Could someone be hacking the technology designed to save us and, instead, use it as a weapon for terror?

Determined to get to the bottom of this mystery, U.S. President Andrew Palma (Andy Garcia) demands someone be sent up to the space station immediately. Max knows there’s only one person for the job – the man responsible for designing Dutch Boy. Hiding out and licking his wounds in Cocoa Beach, Florida, Jake reluctantly agrees to Max’s pleas to save the day, even if it means leaving behind his terrified daughter, Hannah (Talitha Bateman). Once he’s back on-board his beloved Dutch Boy, Jake sets about solving the crisis before the titular “geostorm” (a series of deadly weather events all occurring at the same time) becomes a reality.

If this plot sounds ridiculously convoluted and egregiously complicated, you’re not wrong. For a movie that’s really just a visual spectacle, it’s trying so desperately hard to create some semblance of a storyline around each set-piece. But it’s a storyline filled with plot holes and nonsensical hogwash, which makes for a mind-numbing experience. Even the most far-fetched of disasters movies keeps its plot with one foot grounded in reality. Geostorm throws everything out the window. Bending the laws of physics and space travel (Jake flies to the space station in literally a matter of mere moments, by himself, in a full-sized space shuttle) are this film’s ultimate calling card.

The plot is also hardly subtle on what this film is really trying to say, even if it is wrapped up in a whole swag of farce. The film begins and ends with ominous voiceover dialogue from Hannah, regarding these events being humanity’s fault. Yes, it’s really just a dire warning, folks. A warning that unless we do something about climate change, we’re going to have to build a giant satellite to get us out of trouble. At least, that’s what I think they’re saying?

Obviously, climate change is a serious problem facing our planet, even if President Trump doesn’t seem to think so. And there’s nothing wrong with a blockbuster having a subliminal political message. It’s just this one hits you over the head with a hammer. Repeatedly. Ed Harris (yes, four-time Oscar nominee, Ed Harris) even plays a Trump-esque Secretary of State, who spouts off a line of dialogue that could just have easily been “Make America Great Again!” We’re naturally meant to cheer when Max punches him squarely in the face. It elicited more groans than cheers, in my cinema.

The film’s poor acting doesn’t help its cause either. Butler gives another one-note performance, barking out cliché line after cliché line. It’s not entirely his fault. The dialogue is utterly atrocious and predictable, from start to finish. Sturgess doesn’t quite know how to play an action hero, and he’s horribly miscast here. The shining lights to pull the film out of complete catastrophe are Abbie Cornish as Max’s kick-ass Secret Service agent girlfriend Sarah, who gets the film’s best non-weather related action set-piece, and Zazie Beetz as a genius tech wizard Dana, who gets the film’s best dialogue. They are both sadly used far too infrequently.

But perhaps the film’s biggest failing is its ill-timing. With several recent catastrophic climate events (Florida, Puerto Rico, Mexico, California etc) dominating news on a weekly basis, it’s hardly the most opportune time for a film like Geostorm. We predominantly go to the movies for escapism, and this film will not give it to you. One disaster sequence even takes place in Florida itself, which is so tragically uncomfortable to view. But one must note Geostorm actually began production in 2014, and has been in post-production hell ever since, so they can hardly be blamed for this unfortunate parallel with reality.

It really is a PR nightmare to try to push a climatic disaster film just a few weeks after the US suffered through two “once-in-a-lifetime” hurricanes. Who really wants to see something like this right now? Perhaps it should have been shelved for longer, but then again, when will there be a time when this film isn’t a little too real? Maybe it’s all intentional, and is meant to frighten us into action. But it’s such a mess of a film, so all hope for such a reaction is fruitless by losing the audience’s interest completely.

In saying that, writer/director Dean Devlin does deliver on the spectacle, and there are some visually impressive sequences here, more akin to better disaster fare like Armageddon or Independence Day. But for every great sequence, there are five awful ones. All of them are let down by some truly woeful visual effects which never manage to look quite right. How is this even possible in 2017? It’s embarrassing to think Independence Day, a movie from 1996, looks more realistic in its destruction pieces than this disappointment.

For all its spectacle, Geostorm winds up being a bloated and boring mess of a film, which is saying something, given how much it throws at you. But none of it makes a shred of impact, even its not-so-subtle political message. It really is a complete disaster. Pun intended. Stay home and watch The Weather Channel instead.