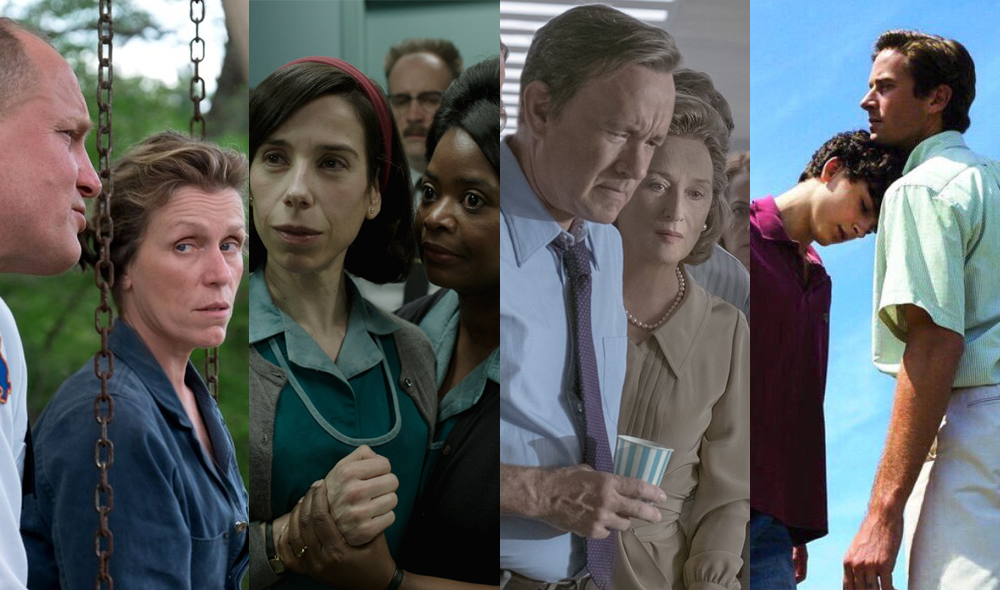 Posted at 18:36h in Awards Season by Doug Jamieson 0 Comments

A lot of people outside the “Oscar watchers” game wonder how we prognosticators make predictions on the Academy Awards. It’s a complicated mix of factors we use to determine what films and artists we’ll essentially guess will be this year’s winners. There’s a good dose of gut-instinct, which can be super accurate or wildly off. Some categories become a terrible battle over brain and heart, and it’s never clear which to go with. But mostly, we rely on the exhaustive plethora of precursor awards to make the path to the Oscars that much clearer.

Some awards shows obviously hold more importance than others. And, until recently, there were certain “rules” an eventual Best Picture winner had to follow to make it onto the stage on Oscar night. Win the important ones and you win Best Picture. Such was the case for a major precursor award like the Producers Guild, once a sure-thing for the eventual Best Picture winner. But the last two films to take this home, La La Land and The Big Short, have shown that’s no longer the case. Likewise with the Directors Guild winner, which is now more indicative of the Best Director prize only, and not necessarily Best Picture.

But there is one stat that is holding firm, and one stat this year’s hopefuls need to snare, if they are a genuine Best Picture contender – the Screen Actors Guild nomination for Best Ensemble. Since this award’s inception in 1995, there has only ever been one eventual Best Picture winner that failed to garner this key nomination – Braveheart in that first year. That’s an incredible run of Oscars history that’s impossible to ignore. It’s the one stat many of us dismissed last year when La La Land failed to be nominated at SAG. It was the first real sign of trouble for its Best Picture chances, and ultimately became far more telling than many gave it credit for.

The SAG snub of La La Land was truly baffling but, ultimately, terribly significant. A film starring two beloved actors with a plot regarding acting and the industry should have been a shoe-in for an Ensemble nomination, even if it wasn’t the largest of ensembles. Films with only three or four actors have been nominated in this category in the past – Beasts of No Nation, Boyhood, Doubt, Sideways, to name just a few. Clearly you don’t need an immense ensemble to be a nominee. But, regardless, we rationalised this as the ultimate reason La La Land failed to be nominated, and, most of us, kept it as our frontrunner. Big mistake.

So why is this award so important to the Academy Awards? One simple reason – it’s coming from the actors. The same actors who make up the largest portion of the Academy’s voting body. Win them over early, and you’re well on your way to Oscar glory. You don’t necessarily have to win the award. In actual fact, the winner of Best Ensemble at SAG matches Best Picture at the Oscars as many times as it doesn’t. In the last six years, it’s only matched up three times. Winning isn’t the key. But, as the last 21 years have shown, you need to at least be nominated, if you want to win Best Picture.

With the Oscars growing closer by the day, how are our contenders looking for this all-important SAG nomination? It’s always a tricky one to predict. SAG only picks five. The Academy can pick up to 10. We’re guaranteed to see some Best Picture nominees not represented at SAG. But which ones will that be?

The safest bet for the Ensemble nomination right now is Three Billboards Outside Ebbing, Missouri. It’s the kind of ensemble film actors will fall over themselves to vote for, especially with the ridiculous pedigree its cast carries. Frances McDormand, Sam Rockwell, Woody Harrelson, Peter Dinklage, John Hawkes, Lucas Hedges – all have been nominated for a SAG in the past. Okay, well not Rockwell. But he will be this year. It’s the kind of line-up SAG has no choice but to rightfully nominate, so lock that in.

Strengthened by the same case is The Shape of Water, which also boasts an impeccable cast of previous award winners and nominees. Sally Hawkins, Richard Jenkins, Michael Shannon, Octavia Spencer, Michael Stuhlbarg. It’s another embarrassment of riches, and lends itself perfectly to the term “best ensemble.” Unlike the Oscars, the SAG voters are not put-off by sci-fi/fantasy films, so you can lock this one in too.

But if we’re talking acting pedigree, you can’t really go past The Post with Meryl Streep and Tom Hanks. While it may seem like this is a two-hander only film, that’s really just for marketing purposes. Its cast is actually rather spectacular. Steven Spielberg has cast some of television’s best including Sarah Paulson, Bob Odenkirk and Matthew Rhys plus veteran character actors Bradley Whitford, Bruce Greenwood, and Tracy Letts. We’re still in the early stages of hearing about this film, so it’s still too early to call it a lock, but it’s looking highly likely.

From here, we really have a whole handful of films battling it out for the remaining two slots. It’s hard to ignore Call Me By Your Name, but with its burning focus on its two male characters and their burgeoning love story, it could suffer the fate of La La Land. Despite some great moments from its supporting cast, especially Michael Stuhlbarg, it’s hard to call it an ensemble piece. Likewise with indie darling Lady Bird, which is ultimately a mother/daughter tale, and can’t lay claim to ensemble work either. And The Darkest Hour is as singular as it gets, with the focus being on Gary Oldman and Gary Oldman alone. These films obviously have better hopes in the acting categories, but never say never. Shining solo performances can create a flow-on effect into voting for the bigger ensemble prize too. After all, The Theory of Everything scored an SAG nom, and you wouldn’t exactly call that an ensemble piece.

There is one film that can truly call itself an ensemble work and that’s Netflix’s Mudbound. It’s not yet getting the Oscar buzz it deserves, purely because we know the Academy’s aversion to the Netflix release model. Thankfully SAG voters don’t have the same issues. Netflix programs have dominated the television awards. And two years ago, Beasts of No Nation received an Ensemble nomination, despite being snubbed practically everywhere else. With a diverse cast working together in perfection harmony, it’s the kind of ensemble production SAG loves to recognise, so don’t be surprised to see it snatch a spot.

And, of course, there’s the dark-horse everybody keeps underestimating – Get Out. It’s sweeping up nominations at other precursor award shows. It just dominated the Gotham Awards. And it’s gaining more and more buzz as a serious contender for Best Picture. However, it’s not exactly being heralded for its acting merits. Or, if it is, it’s purely for the brilliant work of Daniel Kaluuya, and not necessarily the entire ensemble. If it can somehow take a spot here, it could genuinely go all the way on Oscar night.

If there’s one thing SAG is known for, it’s the crazy surprise fifth spot nomination no one was expecting. Last year, it was Captain Fantastic. The year before, Trumbo. And who could forget 2007 when Hairspray somehow stole one of the five spots. What could that be this year?

Perhaps the mostly-amateur cast of the gorgeous The Florida Project. Or this could be the moment for Detroit to finally shine. Maybe even something like The Big Sick could win the actors over with its charm and humour. If you’re talking impeccable casts, it’s hard to go past Murder on the Orient Express. Perhaps even Wonder Woman could show up here.

And you can’t discount Dunkirk, of course. The focus may not be on its acting merits, but it does feature a well-known and much-admired cast, led by Tom Hardy and Mark Rylance. It probably needs this nomination more than any competitor, so it will be interesting to see how SAG voters respond to it.

In a season without a true frontrunner, nailing the precursor awards is more important than ever. Get Out and Call Me By Your Name have both just dominated the Gotham Awards, and with that comes the all-important press and attention from the industry. Do they become the frontrunners now? Not necessarily, but they take a big step forward from the pack. We really may not see who the real frontrunner is until SAG unveils their nominations on December 13.

We saw a slew of rules broken this year with the defeat of La La Land. The tradition of a Best Picture winner being a SAG nominee for Best Ensemble held its ground, but it could just as easily come crashing down this year. Rules were made to be broke, after all. For now, the rule remains in place, and all eyes will be locked to see which five films will nab this important precursor nomination. If nothing else, they should immediately become our five frontrunners.

BEST PICTURE PREDICTIONS, AS OF 28/11/17
Call Me By Your Name
The Post
Dunkirk
The Florida Project
Get Out
The Shape of Water
Three Billboards Outside Ebbing, Missouri
Lady Bird
The Darkest Hour
Mudbound