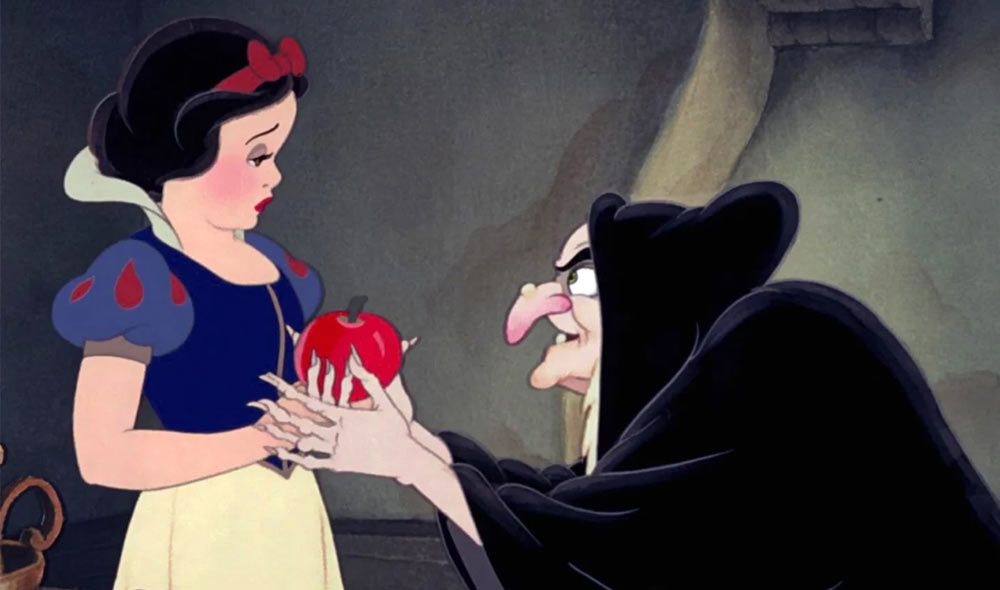 Posted at 12:00h in The House of Mouse Project by Doug Jamieson 11 Comments

The one that started it all.

For 93 years, that’s often been the prefix attached to Walt Disney’s perilously ambitious Snow White and the Seven Dwarfs. Standing as the first full-length animated feature in motion picture history, the film had plenty to prove and even more to lose. The fate of Walt Disney Productions legitimately hung in the balance.

Everything was riding on the success of Walt’s seemingly insane venture many assumed would fall flat on its face. Walt’s brother and business partner Roy desperately attempted to talk him out of it. His wife Lillian also tried and failed. Nothing could persuade the man with a vision unlike any other. Walt was so blindingly confident, he even mortgaged his own house to help finance the production.

Hollywood, on the other hand, wasn’t so sure. Around town, Snow White and the Seven Dwarfs had become mockingly known as “Disney’s Folly.” There was even a bizarre rumour spreading that watching the bright colours of a feature-length animated film could cause audiences to go blind. It’s baffling to consider now, but many in the industry and even some inside Walt’s own studio had little faith in the man on the precipice of making history.

The dazzling achievements of Walt’s career thus far should have been proof enough to trust the man knew what he was doing. After arriving in Hollywood from Kansas in 1923, Walt and Roy quickly established the Disney Brothers Studio‍ and crafted a series of short films starring Oswald the Lucky Rabbit, which were distributed through Universal Pictures.

After the brothers cruelly lost the intellectual property rights to Oswald (Disney wouldn’t regain them until 2006), Walt created a replacement character, originally named Mortimer Mouse. When Lillian wisely suggested a name change to Mickey (just imagine if she hadn’t), everything changed for Walt. In 1928, Mickey Mouse made his debut in the first post-produced sound cartoon short Steamboat Willie and became an overnight sensation.

What followed was an unprecedented run of success through a series of cartoon short films which netted Walt five Academy Awards in the six years preceding the release of Snow White and the Seven Dwarfs. But short animated films were one thing. A feature-length animated film was another. Audiences were accustomed to watching a seven or eight-minute-long animated short before the latest Clark Gable blockbuster. Would they really take to Disney’s Folly?

As you’re probably acutely aware, Snow White and the Seven Dwarfs did not flop. Quite the opposite, in fact. It was a genuine sensation, unlike anything the world of cinema had seen thus far. After premiering at the Carthay Circle Theatre on December 21, 1937, to a rapturous response, Walt graced the December 27 cover of Time magazine, which only further whetted the public’s appetite for the wide release of the film.

Snow White and the Seven Dwarfs would finally debut across America on February 4, 1938, and go on to earn four times more than any other motion picture released that year. It was equally successful internationally and soon became the highest-grossing film of all time; a title it held for just one year after a little film called Gone With the Wind swept that honour away.

Despite the film’s enormous critical and commercial success, Snow White and the Seven Dwarfs received just one nomination at the 10th Academy Awards on March 3, 1938, for Best Scoring. At the time, nominees in this category were composed of both wholly original scores and adaptations of pre-existing music material. As such, Snow White and the Seven Dwarfs controversially lost to One Hundred Men and a Girl; a film score mostly comprised of pre-existing classical music. The very next year, the Academy amended its rules to only acknowledge fully original scores.

In an act of consolation, at the 11th Academy Awards on February 23, 1939, Walt was bestowed an Academy Honorary Award to recognise Snow White and the Seven Dwarfs as a “significant screen innovation which has charmed millions and pioneered a great new entertainment field.” Presented by 10-year-old child star Shirley Temple, Walt received a full-size Oscar statuette and seven miniature awards for obvious reasons.

We can all now respect Snow White and the Seven Dwarfs as a genuine gamechanger of the film industry, but it’s hard to fathom just what this film meant to audiences of 1927. Sure, there was a gimmick element to the prospect of a feature-length animated film that likely initially drew the crowds in. Maybe even a few were there to see how spectacular Disney had failed. But Walt won everyone over with his stunning achievement that became an icon of cinema.

Even some 90 years later, Snow White and the Seven Dwarfs is a marvellous sight to behold. Its narrative is obviously rather quaint and simple by today’s standards, but it elicited emotions few thought possible from animation. Walt had audiences weeping tears of sorrow and joy in equal measure; something that’s now become a staple of animated films. His cartoon shorts simply didn’t have the expansive running time to create such an effect.

With a production time of over three years, Walt was clearly insistent on getting this right. To create realistic movements of the film’s characters, the animators used live footage of actors performing scenes as reference for their final drawings. A few sequences were even directly traced from this live-action footage to authentically craft the intricacies of human behaviour.

But its Albert Hurter’s gorgeous design work that truly brings Snow White and the Seven Dwarfs to life, particularly his spectacular watercolour backgrounds. It set the standard for how beautifully evocative animated films could be, particularly on the big screen. By utilising Disney’s new multiplane camera technique, the film has a three-dimensional quality to many of its sequences, allowing audiences to truly immerse themselves in the film and be taken away by the journey Walt and his company had crafted.

The visuals were further complemented by the film’s instantly-iconic soundtrack featuring eight original songs by Frank Churchill and Larry Morey. From the dwarfs rousing “Heigh-Ho” to the toe-tapping “Whistle While You Work” and the absurdity of “The Silly Song,” the songs perfectly complement Paul J. Smith and Leigh Harline’s beautiful score. And, in what would become a standard of Disney films to come, we see the first example of the “I Want” song, with Snow White yearning for love in “Someday My Prince Will Come.” It’s hardly surprising to learn Snow White and the Seven Dwarfs was the first film to commercially release a soundtrack. Walt clearly knew the power of the music within his film.

The final element of Snow White and the Seven Dwarfs which made it such a spectacular success was its voice cast and characterisations these talented performers brought to their roles. Each dwarf character was clearly defined by their visual representations, but it was the talented men behind the voices which truly made them something special. Likewise with the villainous Queen, whose character designs told you all you needed to know of our antagonist. But it’s Lucille La Verne’s menacing voice performance that takes the villain to another level. That infamous cackle when she’s in her hag disguise can still send a shiver down your spine.

And then there’s our very first Disney Princess and the woman who brought her to life. In recent years, Adriana Caselotti’s performance as Snow White has become somewhat divisive, with equal fans and critics of her perpetually cheerful, high-pitched voice. While it’s easy to understand these criticisms and it can take some time to acclimatise to the tone of Caselotti’s voice, it perfectly suits the naivety and sweetness of a character whose very innocence is what defines her. Her gentleness and optimism are why you connect with this film and feel so affected by the tragic treatment of her cruel stepmother.

Fun fact – Caselotti’s contract essentially banned her from any future voice work without Disney’s approval. Despite the fact she was only paid $970 for her work on the film (approximately $18,000 in 2020), the company wanted to protect the “illusion of Snow White” and never hear Caselotti’s voice used for another character. But, by all accounts, Caselotti held no hard feelings against Disney, spending the rest of her life appearing in promotional spots for the company and even re-recorded “I’m Wishing” for use at the Snow White Wishing Well in Disneyland.

It’s unfathomable to ponder where we would be today if audiences had genuinely rejected Snow White and the Seven Dwarfs. Already in debt up to their eyeballs, it’s probable Walt Disney Productions would have collapsed. Walt himself would likely have been laughed out of Hollywood. The remaining 57 films which make up this project would not exist. Nor would Disneyland or any of the Disney theme parks around the globe. The world would be a very different place.

Snow White and the Seven Dwarfs was a miracle of cinema. It’s a film that legitimately changed the landscape of cinema itself. It defied the odds and became one of the most beloved and successful films ever made. Its legacy within the Disney canon is unrivalled. It opened the door to a genre of cinema we now know and love. It set the standard for all animated films which followed. And the world of cinema was truly never the same again.