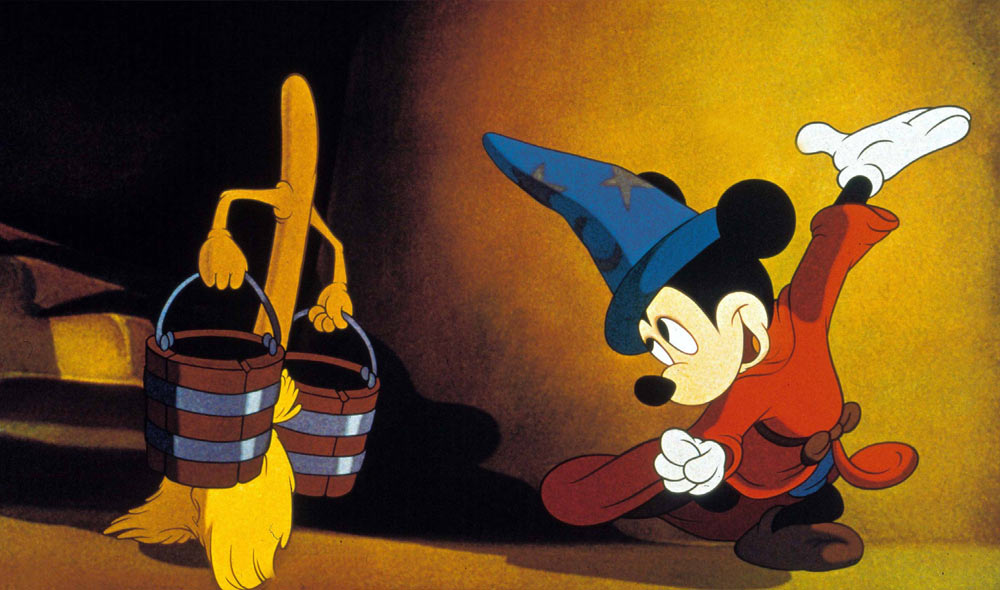 Posted at 12:37h in The House of Mouse Project by Doug Jamieson 4 Comments

The one that brought classical music to life.

After delivering two acclaimed animated masterpieces, most would assume Walt Disney might merely play it safe with his third animated feature film and simply deliver another family-friendly animation to charm audiences across the globe. But Walt was never one to take the expected path. Just eight months after the release of Pinocchio, he would unveil his most ambitious work thus far that challenged everything Disney had established within the animated film genre.

Fantasia was an enormously risky undertaking that completely abandoned the power of the narratives found in Snow White and the Seven Dwarfs and Pinocchio. Instead, Fantasia existed as a daring exhibition of the very art form of hand-drawn animation, while also serving as a loving tribute to the power of classical music. Walt wanted to create something unique and it would go on to stand as one of his most truly special creations.

Strangely enough, the idea for Fantasia was born in 1936 when Walt recognised the popularity of Mickey Mouse was beginning to fade. Despite critical acclaim, Mickey’s recent animated short The Band Concert failed to receive an Academy Award nomination, while his pal Donald Duck was beginning to become the favourite Disney star with American audiences. It’s unfathomable to consider now, but, at the time, it really did appear Mickey Mouse was on the way out.

Determined to return his beloved star to the forefront, Walt began developing The Sorcerer’s Apprentice, an extravagant cartoon short for Mickey to headline. Based on Johann Wolfgang von Goethe’s poem and set to the orchestral piece of the same name by Paul Dukas, the short would further expand on the concept of the animation and classical music fusion found in Disney’s early cartoon series, the Silly Symphonies.

By happenstance, Walt would have a fateful encounter with Leopold Stokowski, the acclaimed conductor of the Philadelphia Orchestra, at a restaurant in Hollywood where he discussed the idea of the upcoming classical-focused short. Being a fan of Dukas’ piece and the work of Disney thus far, Stokowski offered to conduct the piece and collaborate with Walt on the project.

But soon enough, the production costs of The Sorcerer’s Apprentice began to soar and it became obvious to Walt a short film would never recoup its $125,000 budget. Walt and his production team instead made the decision to make Mickey’s segment one short of a feature-length presentation featuring several different numbers, each set to their own piece of classical music.

Working under the rather dull title of The Concert Feature, numerous pieces were discussed to form the program of the daring project. In September 1938, Walt gathered around 60 of his artists for a two-and-a-half-hour concert where he discussed the project and showed a rough cut of The Sorcerer’s Apprentice short. At its conclusion, the crowd burst into rapturous applause, confirming to Walt his unique venture had the potential to be something truly spectacular.

When a publicist for Disney’s film distributor RKO Radio Pictures suggested the film needed a snappier title, Walt held a contest within the studio to find something more suitable. After 1,800 submissions, Fantasia was born. With the final seven pieces now confirmed in late 1938, production began with over 1,000 animators bringing to life more than 500 animated characters through the two-hour feature film.

As the film’s Master of Ceremonies Deems Taylor would explain, Fantasia features three distinct forms of classical music which would dictate the style of animation that would accompany each segment. The first is the kind that tells a definite narrative story. The second would feature no specific plot, rather a series of definite pictures. The final and more abstract kind features music that “exists simply for its own sake.”

Walt made the bold decision to begin Fantasia with that third kind of music with a piece featuring the abstract art of German animator Oskar Fischinger, set to the music of Bach’s Toccata and Fugue in D Minor. Fischinger’s work was complemented by the work of effects animator Cy Young, who produced a series of drawings influenced by the unique patterns on the edges of a piece of sound film. It’s a striking display of abstract imagery and modern special effects that immediately made it clear this was not your ordinary animated film.

The second sequence echoed back to Disney’s famed Silly Symphonies series, pairing a piece of classical music with colourful dancing characters to dazzle both young and old. Set to Tchaikovsky’s The Nutcracker Suite, we witness the famous ballet performed by dancing mushrooms, flowers, goldfish, and fairies. It’s a dazzling display of beautiful imagery, aided by the sweeping music of one of Tchaikovsky’s greatest works.

Arriving third in the program was the film’s now-infamous segment The Sorcerer’s Apprentice, which would do precisely as Walt intended and surge the popularity of Mickey Mouse once more. Sorcerer Mickey would go on to become one of Disney’s most marketable (and merchandise-friendly) images. Even those who haven’t seen Fantasia would have some awareness of this outfit. The segment has been parodied and referenced in dozens of films and television shows over the years. And for good reason. It’s absolutely brilliant.

Mickey was completely redesigned for The Sorcerer’s Apprentice by animator Fred Moore who added pupils to his eyes for the first time for greater ranges of expression and emotions. The animators used bolder and brighter colours and lighting than any previous Disney short, crafting an eye-popping segment that worked in perfect harmony with Dukas’ music. It can be a rather terrifying piece at times, especially when Mickey takes an axe to a group of pesky magical broomsticks. But it’s the one segment you cannot forget.

Concluding the first act is another rather abstract piece and possibly the most divisive segment of Fantasia. Set to the music of Stravinsky’s Rite of Spring, the sequence tells the story of the dawn of life on Earth and the age of the dinosaurs before their eventual extinction. At over 20 minutes long, the segment is one of the longest in the film. Without a clear narrative and pacing that rarely moves quickly, it can feel rather exhausting. Regardless, the animation is magnificent and it’s a great insight into Earth’s prehistoric days.

After the film’s intermission and quirky sojourn into a “Meet the Soundtrack” vignette, the second act begins with a mythological segment set to Beethoven’s Pastoral Symphony and starring centaurs, Pegasus, the Gods of Mount Olympus, fauns, cupids, and other creatures of Greek mythology. It tells the story of the mythological creatures gathering for a festival to honour Bacchus, the god of wine; a party eventually disrupted by Zeus, who decides to have some fun by throwing lightning bolts at the attendees.

There is an awkward element to this segment which needs to be addressed. In its original run, the Pastoral Symphony sequence featured several black female centaurs, designed in now-outdated racially stereotypical style. One black centaur was depicted polishing the hooves of a blonde, white centaur, almost echoing slave imagery. For several decades of re-issues, these images remained until the late 1960s when they were promptly removed, never to be seen again. It’s the first example of controversy leading to censorship; an issue many have varying opinions on. You can make up your own mind on this one.

The second-last segment of Fantasia is another of the more famous sequences most would be acutely aware of. An absurd and silly riot of animation, the Dance of the Hours from Ponchielli’s opera La Gioconda is the comical highlight of the entire film. The genius of Walt and his eleven animators to craft a ballet starring tutu-clad hippos, alligators, elephants, and ostriches was a remarkable move. The design team studied both animals at Los Angeles’ Griffith Zoo and live-action footage of Russian ballerinas to inspire the creation of this spectacular sequence. Much like most of Disney’s work, it’s a segment that really shouldn’t work, but somehow absolutely does.

Finally, we reach the majestic finale of Fantasia, where Walt has saved his absolute best work for last. Introduced as “a combination of two pieces of music so utterly different in construction and mood that they set each other off perfectly,” the concluding segment features Modest Mussorgsky’s dark masterpiece Night on Bald Mountain and Franz Schubert’s ethereal Ave Maria, creating a contrasting work that still stands as one of the most brilliant pieces in Disney history.

According to religious tradition, Bald Mountain is the gathering place of Satan and his followers. In Fantasia, Satan takes the form of Chernabog, a terrifying winged demon perched atop the mountain. Under his spell, a group of creatures furiously dance until the coming of dawn where the sounds of church bells send the army slinking back into the darkness. We then hear the refrains of Ave Maria and witness the simple sight of morning parishioners journeying to Sunday mass. It’s a piece of juxtaposed animation that’s truly iconic and unforgettable, making it the perfect conclusion to Walt’s ambitious project.

Fantasia was released in a unique roadshow-style way that employed the use of Fantasound, an early stereophonic system which screened the film on two projectors; one for the vision and one for the soundtrack. At a cost of $85,000, the system required installation at the theatres Fantasia played in, meaning the film only opened in 13 cinemas across America. Despite the higher-than-usual admission price, the screenings were consistently sold out including a staggering run in New York City of 49 consecutive weeks.

Much like Pinocchio, the box office of Fantasia was hit by the impact of World War II, leading to its planned European release being cancelled and the Fantasound system being completely dismantled. While the film would recoup its budget through re-releases over the next several decades, it was considered another failure for Disney, leading to even greater losses than Pinocchio.

Despite its initial commercial failure, Fantasia was highly critically acclaimed, even eliciting not one but two honorary Academy Awards; one for Stokowski for his “unique achievement in the creation of a new form of visualized music” and another for Walt and his team for their “outstanding contribution to the advancement of the use of sound in motion pictures.” Strangely, the film was somewhat rejected by the classical music community, with several noted composers and music critics feeling the film robbed the musical pieces of their integrity.

In recent years, Fantasia has been admired for its daring fusion of animation and classical music and is now considered a landmark moment for Walt Disney Animation Studios. While it lacks the emotional narrative of its contemporaries, Fantasia is a spectacular showcase of the talented artists behind each boldly unique sequence. The entire experiment plays like a lavish concert elevated by the striking imagery dancing on screen. It was the ambitious task of Walt Disney’s career but one such a visionary could actually achieve.