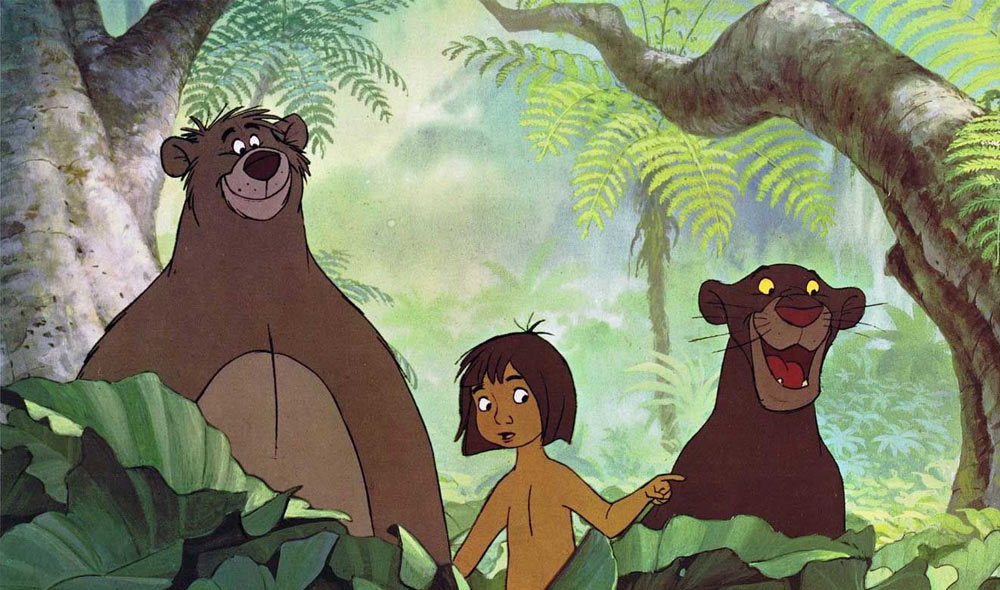 25 Apr THE HOUSE OF MOUSE PROJECT – ‘The Jungle Book’

Posted at 09:09h in The House of Mouse Project by Doug Jamieson 2 Comments

The one that stood as Walt’s swansong.

By the mid-1960s, Walt Disney was sadly nearing the end of his life. Thirty years after he changed the entire landscape of cinema with Snow White and the Seven Dwarfs, Walt was about to oversee and produce his final feature-length animated film. While he was still heavily involved in the secretive project to open a Disney park in Florida, the mixed reaction to The Sword in the Stone saw Walt move back to a more participative role in Disney’s next animation project.

With his health deteriorating after years of smoking, it’s entirely possible Walt felt his time may be running out, perhaps even feeling a yearning to return Disney animation to its former glory before he departed. After taking a backseat during the production of Disney’s previous two animated features, Walt decided it was time for him to take a more direct role in the development of The Jungle Book; an adaptation of Rudyard Kipling’s classic 1894 novel of the same name.

In 1963, the initial story treatment was written by perennial Disney collaborator Bill Peet, with little supervision from Walt, as had been the case with both One Hundred and One Dalmatians and The Sword in the Stone. Peet closely echoed the dark and sombre tone of Kipling’s original book, including creating the villainous character of Louie, who enslaved Mowgli and demanded he teach the orangutan how to make fire. The original ending featured Mowgli encountering a human hunter who was threatening to burn down the entire jungle, leading to a confrontation where the young boy kills the hunter with his own gun.

After decades of decidedly light fare, Peet felt it was time for Disney to explore more adult themes, feeling particularly proud of the daringly different story treatment he had created. But very little of Peet’s adaptation sat well with Walt, who preferred a more family-friendly approach, particularly after the confused tone and direction of The Sword in the Stone. When Peet refused to adjust his writing, he abruptly left the studio in 1964 and never worked for or spoke to Walt Disney ever again.

After this unfortunate clash, Walt became more heavily involved with the overall production of The Jungle Book. After hiring Larry Clemmons to rework Peet’s original story treatment, Walt took an active role in the story workshop meetings, even acting out each role, helping to create gags, and pushing Clemmons to develop more emotionally resonant sequences.

Under Walt’s watchful eye, Clemmons kept the characterisations of Peet’s original treatment and basically threw out everything else. The tone was lightened. The story was simplified. Wolfgang Reitherman was hired to direct his second successive Disney animated feature after The Sword in the Stone. And the foundation was laid for the animators to begin their work.

In a notable change for the studio that would eventually become one the very staples of feature-film animation itself, The Jungle Book stood as the first time the Disney animators genuinely based the characters designs and mannerisms on the voice actors themselves. Comedian and radio star Phil Harris was hired to voice the lovable bear Baloo, who truly looks and acts like the comedian. Likewise with the film’s menacing villain, Shere Khan, who bears a striking resemblance to veteran British actor George Sanders, the man bringing the tiger to life.

New Orleans jazz singer Louis Prima was tapped to bring King Louie to life, who was now to be portrayed with a more comical tone to match the Prima’s outlandish persona. Walt also employed the use of several Disney veteran voice actors including Sterling Holloway (Cheshire Cat in Alice in Wonderland and the future voice of Winnie the Pooh) as Kaa, J. Pat O’Malley (Jasper in 101 Dalmatians and both Tweedledee and Tweedledum in Alice in Wonderland) as Colonel Hathi, and, in her final role, the legendary Verna Felton (Mrs. Jumbo in Dumbo, the Fairy Godmother in Cinderella, and the Queen of Hearts in Alice in Wonderland) as Winifred.

In what would have stood as a major publicity coup, Walt originally planned to include the four members of The Beatles in the film as the voices behind a group of mop-top haired vultures. While the band’s manager, Brian Epstein loved the idea, John Lennon refused to partake in something as frivolous as an animated film, which proved to be ridiculous, given The Beatles would star in Yellow Submarine just three years later. Regardless, the vultures stayed in the film with the voices behind them sounded achingly similar to John, Paul, George, and Ringo, Liverpudlian accents and all.

Initially, folk singer Terry Gilkyson had written several songs for the film that aligned with Peet’s darker original story treatment. After Peet’s treatment was abandoned, so too were all but one of Gilkyson’s songs. Ironically, that one surviving song was “The Bare Necessities,” which became the film’s most enduring number and ultimately the track that received an Oscar nomination for Best Original Song, which it lost to “Talk to the Animals” from Doctor Dolittle.

Taking Gilkyson’s place were the Sherman Brothers, Richard and Robert, who were riding high after winning two Academy Awards for their work on Disney’s Mary Poppins in 1964. The pair created seven original tracks including the swinging “I Wan’na Be Like You,” the ominous “Trust in Me,” and the military-inspired “Colonel Hathi’s March.” Walt released the soundtrack as two versions; one featuring the original songs from the film and another featuring reworked jazz versions of the film’s songs, performed by Louis Prima and his band under the title “The Jungle V.I.P.s”.

The animation of The Jungle Book utilised Xerox photocopying technology to keep costs low and production more efficient. Under the direction of art director Ken Anderson, the character designs featured rough, artistic edges, giving the film a decidedly different aesthetic to much of Disney’s earlier work. While the character designs were far from realistic animal creations (let’s be honest…Baloo is essentially a giant teddy bear), Anderson and his team crafted an instantly loveable menagerie of memorable characters.

While nowhere near as detailed as previous Disney films, the evocative hand-painted backgrounds were easily the best Disney had produced since Sleeping Beauty, marking a brief return to Disney seemingly focusing on crafting a film as visually impressive as it was entertaining. That being said, it’s inescapable how the budgetary restraints affected the final film, with noticeable pencil lines and hastily finalised sketches evident throughout certain scenes.

The key messages of The Jungle Book of friendship, family, and finding one’s place in the world are ever eternal, as is the idea of slowing down and enjoying the simple pleasures of life. While it may not be overtly obvious, there’s also a keen subtext regarding animal conservation and the follies of man’s destruction of the natural world, much like the subliminal messages found within Bambi. But, above all things, The Jungle Book is a charming coming of age tale that may follow many familiar tropes, but therein lies its endless charm.

After many years of heavy unfiltered smoking, Walt was diagnosed with lung cancer in early November 1966. On November 30, he fell gravely ill and was taken to St. Joseph Hospital in Burbank, California. Walt hid his cancer from those at the studio, with his brother Roy informing friends and colleagues Walt was merely undergoing minor neck surgery. After doctors performed an emergency partial lung removal, Walt showed signs of improvement and was sent home to spend Thanksgiving with his family. But his condition soon deteriorated and he was admitted back to hospital on December 5, his 65th birthday.

Over the next several days, Walt would rapidly lose weight and become terribly pale and gaunt, as the lung cancer took hold of his ailing body. No one at the Disney studio was aware their boss was slowly dying, with Walt wanting to avoid anyone at the studio remembering him in this condition. Roy was permanently by his brother’s bed, constantly rubbing his perpetually cold feet and making sure Walt was kept comfortable in his final days.

By happenstance, St. Joseph Hospital was literally across the street from Disney’s Burbank studios, with Walt able to see the building from his window. Roy ordered the studio to keep all the lights on every night so his brother could continue to see the building from his bed. On December 14, Walt sent his wife Lillian home so he may have a private discussion with his brother. In his final conversation with Roy, Walt would imagine the entire floorplan for Walt Disney World, outlining the map with his finger on the ceiling of his hospital room.

At 9:30am on December 15, Walt passed away of circulatory collapse caused by his lung cancer. When news of his death reached the Disney studio, it was met with shrieks of griefs and disbelief, given no one at the studio had any idea how gravelly ill Walt truly was. Walt’s administrative team at Disneyland gave consideration to closing the park for the day, but instead kept it open, as Walt would have wanted. The flags on Main Street were instead lowered to half-mast, with many park attendees stopping to say a silent prayer. News of Walt’s death was front-page worldwide news that day and numerous newsreaders were brought to tears during their nightly broadcasts.

Released just ten months after Walt’s death and undoubtedly spurred by nostalgic sentiment over his passing, The Jungle Book was a box office sensation. Produced for just $4 million, the film took over $11 million during its initial U.S. run and over $23.8 million worldwide, making it the most successful animated film during its initial run. After several box office disappointments, Disney finally had another huge animated hit. However, without their leader, it proved rather redundant, and it would be decades before the studio genuinely flourished once more.

Thirty years after the release of Snow White and the Seven Dwarfs, Walt Disney’s death at the age of 65 would ultimately represent the true end of an era. The three-decade-long golden age of Walt Disney Productions came to a sad close in 1967 with the final animated film overseen and produced by Walt himself. In the years that followed, the studio lost the magic touch Walt somehow always managed to bring to any production. Before their eventual renaissance in the late 80s and early 90s, nothing quite captured the spirit of those early films and Walt’s passing almost ended the studio entirely.

While it never quite receives the adoration of most of its counterparts, The Jungle Book is an underrated gem which consequently stands as a beautiful swansong to the man who started it all. Given the films that followed in the years after Walt’s passing, The Jungle Book highlights the brilliance of Walt Disney and why his death was a loss the studio struggled to recover from.