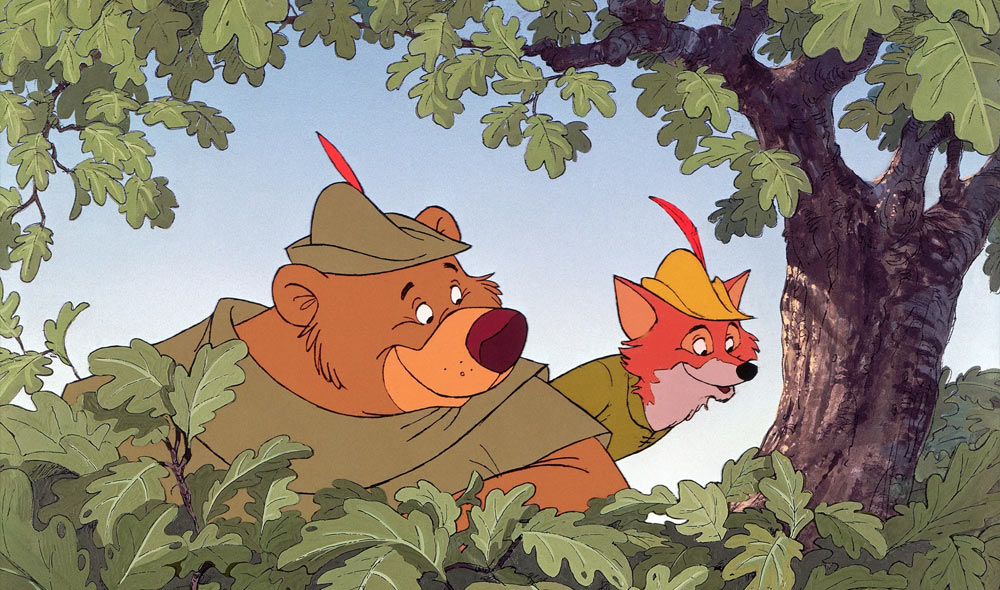 Posted at 14:05h in The House of Mouse Project by Doug Jamieson 3 Comments

The one that recycled the past.

After taking the reins from his late brother, Walt, following his death in 1966, the 1970s began with Roy O. Disney promising to steady the ship and honour the legacy the Disney studio had established over the last five decades. On October 1, 1971, Roy achieved his brother’s grand dream of a new Disney theme park in Florida, with Walt Disney World opening to the public. Sadly, less than three months later, Roy would suffer a massive stroke and die from a subsequent brain hemorrhage.

For the second time in five years, Walt Disney Productions had lost its beloved leader and the entire team was once again thrown into anxiety over the future of the company, particularly the animation department. When Card Walker and Donn Tatum were named President and CEO respectively, it marked the first time the studio would be led by anyone outside the Disney family.

Without the nostalgic familial connection to Walt’s love for animation, both Walker and Tatum saw Disney’s animation department as somewhat of a financial liability. The executives were both “numbers men” who observed a consistent pattern of Disney animated feature films barely breaking even on their production costs. That included the recent release of The Aristocats, which had been a box office success but not enough to turn the same level of profits as Disney’s live-action films or their theme parks.

Once again, the Disney animation department was facing closure. After the protestations of numerous animators who argued the very core foundation of the Disney brand lay with animated properties, Walker and Tatum relented on the potential shut down of the animation department. However, they reduced the budgets on all future animated films to a barebones level never before seen within the Disney studio. The first film produced under this new regime would highlight how this decision would affect the final quality of Disney animated productions for the next 15 years.

The idea for what would eventually transform into Robin Hood began way back in 1937 when Walt floated the idea of adapting the 12th-century legend of Reynard the Fox. The fable centred on a cunning anthropomorphic red fox who was known for being a brilliant trickster and thief. However, after several project meetings, Walt grew concerned the character was an unsuitable choice for a Disney hero. When the character was adapted into an anti-Semitic children’s story published in a Dutch pro-Nazi magazine, Walt permanently shelved the project.

Over the years, Walt continued to look for projects to incorporate the fox character including an animated adaptation of Robert Louis Stephenson’s Treasure Island, which went on to become a fully live-action film, and as the key villain in an adaptation of Edmond Rostand’s Chanticleer, the animated rooster project which was scrapped in favour of The Sword in the Stone. But nothing came to fruition during Walt’s life and the idea sat on the shelf for numerous years.

It wasn’t until the late 1960s when storyman and animator Ken Anderson was exploring possibilities for the studio’s next animated film after The Aristocats that the studio would reapproach adapting Reynard the Fox. Both Walker and Tatum were pushing the animation department to find a “classic tale” as the subject for Disney’s next animated project. As such, Anderson suggested the ingenious solution of incorporating the fox character into an adaptation of folklore hero Robin Hood, thus preserving Reynard’s thievery and trickery but presented in a more heroic and endearing manner.

Initially, Anderson had wanted to set Robin Hood in America’s Deep South in an attempt to capture the spirit of Disney’s problematic 1946 live-action/animated musical Song of the South. However, Disney studio executives were already aware of the negative reputation of Song of the South for its outdated cultural depictions. Instead, director Wolfgang Reitherman decided to set the film in its traditional English location, echoing Disney’s 1952 live-action adaptation The Story of Robin Hood and His Merrie Men and Warner Bros. wildly popular 1938 film The Adventures of Robin Hood, starring Errol Flynn and Olivia de Havilland.

Veteran Disney writer Larry Clemmons, the man responsible for writing both The Jungle Book and The Aristocats, was assigned to create the script and storyboard the entire film. From here, the film would struggle through several years of development issues, namely the film’s cast of characters. Initially, animators Frank Thomas and Ollie Johnston designed the Sheriff of Nottingham as a villainous goat, hoping to offer something different than the stereotypical creatures Disney generally cast as its villains. But Reitherman disagreed and insisted the character worked best as a wolf.

Anderson wished to include all of Robin’s Merry Men, which typically numbered anywhere between 20 and 100 fellow outlaws. He too was overruled by Reitherman who felt the film would work best as more of a “buddy picture” focused solely on Robin Hood and Little John as a duo. Anderson was still able to include typical Merry Men characters Friar Tuck and Alan-a-Dale in supporting roles, with the latter serving as the film’s lute-playing narrator.

With the amount of time spent on the film’s script and character development, production on Robin Hood fell disastrously behind schedule. In order to meet the film’s tight deadline and low production budget, the animators were left with little choice but to recycle animated sequences from other Disney properties, namely Snow White and the Seven Dwarfs, The Jungle Book, and The Aristocats.

These sequences were simply traced over and reworked, essentially cannibalising the work of previous animators. When Phil Harris was cast to voice the role of Little John, animators merely reworked the character design of Baloo from The Jungle Book, given Harris voiced both characters. This is abundantly evident in the musical performance of “The Phony King of England” where the animators reused Baloo’s movements during the performance of “I Wanna Be Like You.”

Also during the performance of “The Phony King of England,” Maid Marian is pictured clapping along before lifting up her skirt so she can join the dance. If the sequence looks achingly familiar, Snow White performs the exact same movements during “The Silly Song” in Snow White and the Seven Dwarfs. The band playing during the musical number is reworked animation from the performance of “Ev’rybody Wants to Be a Cat” in The Aristocats. For a detailed rundown of these moments, this video provides side-by-side comparisons.

To further expedite production, the animators simply reused newly-created sequences of animation several times throughout the film. Robin Hood opens with Alan-a-Dale introducing the characters and their voices actors against a bare grey background before they march and chase each other across the screen. Every single moment in this opening sequence appears at some point later in the film. Any time Robin shoots an arrow across a scene, it’s the same piece of arrow animation you saw earlier.

This is by no means a slight against the animators themselves. With such budgetary restraints and scheduling issues, they were clearly left with no choice but to make Robin Hood as quickly and cheaply as humanly possible. In times of desperation, recycling existing animation was their only option. In recent years, several articles and videos have criticised Disney for this method of production, labelling it as something akin to plagiarism. But this was a studio copying itself, which is far from the definition of plagiarist behaviour.

As with practically every Disney animated film of this era, Robin Hood suffers from its lack of a genuinely villainous antagonist, with Prince John standing as one of the most incompetent and clumsy villains in Disney history. While he is a wonderfully comical character, brought to life by a fabulously petulant voiceover performance by two-time Academy Award winner Peter Ustinov, he rarely troubles Robin and hardly provides any conflict for the narrative.

However, there are some who even suggest Prince John was purposely crafted as a bumbling, inept fool as a metaphor for the changing of the guard within the Disney studio. With the animators facing constant challenges from the tough restrictions set by their new President and CEO, it’s entirely plausible this was their cathartic outlet to parlay their frustrations into.

Robin Hood was released on November 8, 1973, to a fairly mixed response from critics. The New York Times called it “charmingly conventional,” while the Chicago Tribune labelled it “Saturday morning TV cartoon stuff.” Regardless, it was another box office success for Disney, taking $9.6 million in the U.S. to end the year as the 10th highest-grossing film of 1973. Internationally, the film grossed $18 million, which was a new record for a Disney animated feature.

While the film’s characters rarely see merchandise releases or theme park appearances, Robin Hood has become somewhat of a cult favourite amongst some Disney fans. The film was the childhood favourite of Zootopia director Byron Howard, who credits Robin Hood as deep inspiration for his film’s sly red fox character, Nick Wilde. Due to his inherent (and likely completely unintentional) sex appeal, Robin himself has strangely become somewhat of a sex symbol, with many millennials considering the fox their first animated crush.

Another product of a difficult time at the Disney studio, Robin Hood is a mish-mash of reused animation and character designs which leaves many Disney enthusiasts with a sour taste in their mouths. It’s one of Disney’s least original creations, compounded by its achingly familiar narrative which offers little more than other adaptations of the classic fable besides animals replacing humans.

It’s a great timewaster for young viewers to enjoy, particularly with its exhaustive use of slapstick humour. However, by this point, we should be expecting so much more from Disney animation and Robin Hood simply doesn’t deliver. For all the restrictions on the animation team, it’s a miracle the film even exists, but the final product is terribly forgettable and ultimately entirely unremarkable.